Consider this: At the age of 18, Eagle-Vail’s Mikaela Shiffrin is now tied for fourth on the all-time World Cup victory list for an American woman after winning the seventh slalom of her fledgling career Tuesday night in Flachau, Austria. 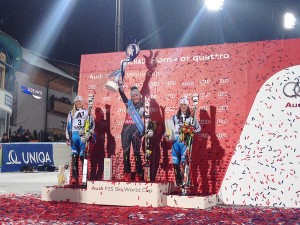 Michaela Shiffrin celebrates on the top step of the podium Tuesday in Flachau (Doug Haney/USSA photo).

Vail’s Lindsey Vonn, the all-time American record-holder with 59 career wins, didn’t get her first victory until she was 20. Shiffrin, the defending world champion in slalom, is now tied for fourth among American women with teammate Julia Mancuso. Only retired racers Picabo Street (9), Tamara McKinney (18) and the recently inactive Vonn collected more wins.

“It’s nice to sing my National Anthem a couple of races before the Olympics,” Shiffrin said. “Hopefully I can sing it again in Sochi. It’s really cool to be a favorite going into the Olympics. Imagine being in my position. I’m 18 and I’m going to the Olympics. It’s one of my dreams come true.”

Shiffrin is now the second youngest woman to win seven World Cup slalom races and the youngest in 34 years. Perrine Pelen, of France, won her seventh World Cup race in March 1979. It was the second straight season Shiffrin has won the Flachau slalom, joining retired Croatian Janica Kostelic and Shiffrin idol Marlies Schild as the only athletes who have won it twice.

“It’s always feels good to ski like that,” Shiffrin said. “It’s the best feeling because you work so many years and all you really want to do is ski in a race like you do in training. That first run was some of my best skiing. I’m really psyched to have done that in a race.”

Shiffrin is a now the clear-cut gold-medal slalom favorite heading into next month’s Winter Olympics, and also has the best chance of collecting a medal for the U.S. women’s alpine squad in Russia. Her rising star power will hopefully help compensate for the loss of injured superstar Vonn, 29.

Shiffrin became the first American skier of either gender to win three or more slaloms in a World Cup season twice, having won four times last season and now three times and counting this season. Phil Mahre (1981-82), McKinney (1982-83), and Bode Miller (2001-02) are the only other Americans who accomplished the feat just once.

The Eagle-Vail racer and Burke Mountain Academy standout was recently named the 2013 Colorado Athlete of the Year along with NFL quarterback Peyton Manning of the Denver Broncos. Manning and Shiffrin will be honored with five other Colorado competitors at the 2013 Colorado Sports Hall of Fame banquet on April 17 in Denver.