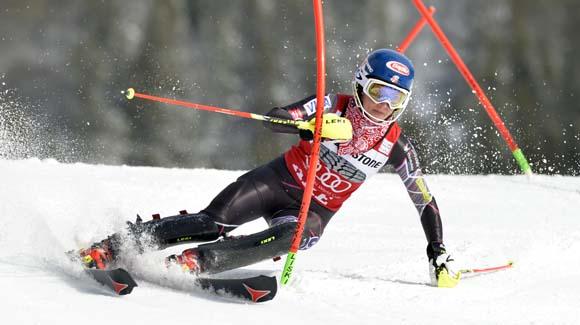 The first win of Shiffrin’s career came less than two years ago on Dec. 20, 2012, in Are, and now the Burke Mountain Academy graduate ranks all alone in fourth on the all time victory list by American women. Only Vail’s Lindsey Vonn (59), Tamara McKinney (18) and Picabo Street (9) have more wins on the World Cup tour. Shiffrin is also the youngest Olympic and world champion ever in slalom.

“My first win was, of course, amazing,” Shiffrin said of her 2012 victory. “It just seemed like such a perfect night to get a World Cup win. It was a dream come true and kind of the start of all of this, because in my mind I finally felt like I really could be a good ski racer at the World Cup level.”

Shiffrin then remembered a special moment that happened after that first win.

“When I came to do my first press conference everyone was so nice and I met this little girl right outside,” Shiffrin said. “She was really young and she had leukemia. Her mom just said, ‘Do you think you could take a picture with her. It would really make her day.’ I just keep thinking about that, like she was a little lucky charm for me for some reason.

“It just seemed like my first win, and it was such a great day for me, and here’s this girl and all she wants is a picture. It put everything in perspective. Since then I’ve carried that same motto, that I can win Olympics, it is all great, but it could be a lot worse so I have to be grateful for everything I have.”

Shiffrin opened a .66 gap on the field in the first run despite stormy weather. She then held on to the lead to win by .60 over Maria Pietilae-Holmer of Sweden. Anna Swenn-Larsson, also of Sweden, was third for the first World Cup podium of her career.

Shiffrin mathematically clinched her second straight season slalom title. Frida Hansdotter of Sweden was the only other athlete in the title hunt and was second after the first run, but she finished fourth to hand the title to Shiffrin before the final race of the season.

“I’m just really comfortable on slalom skis. It feels so easy to me when I’m loose and I let my skis go and it just seems like they find the finish for me and I don’t have to work so hard,” Shiffrin said. “My next goal is to win in GS. Hopefully I can get some good training in and have some confidence, because I know my GS skiing is fast enough to win, but I really have to do my best skiing and that seems to be slipping away from me a little bit.”

Shiffrin finished fifth in GS at last month’s Sochi Olympics and climbed on a GS podium at Beaver Creek in December.

“She’s very comfortable in slalom. That’s her domain,” U.S. Ski Team Women’s Technical Head Coach Roland Pfeifer said. “I just go day by day and hope I can do a good job. It makes me a little bit proud and I must be doing something right with Mikaela. We’re all still thinking about what’s going to be her future.

“It’s very challenging to make the next step. We need to be very inventive to even extend our gap a little bit more and get better and better. Mikaela is such an invaluable athlete for the U.S. Ski Team. She is the golden feet, so we really need to focus what we’re going to do with her. The whole thing makes me think about what I’m going to do next year to balance her.”

“This is definitely a really cool hill,” Ligety said. “It has so much personality and it’s really a fun hill to ski. It has the steep parts. It has some rolls. It has a little bit of a gliding section. So it’s a true GS skier’s hill. I just try to stay ahead of the rut as always. I’m not the kind of person that tries to cut off line, so I just tried to ski smart and be clean as much as I could.”

The 23rd win of his career also moved Ligety within 50 points of Austrian Marcel Hirscher, who finished fourth, for the 2014 World Cup giant slalom title. The title will be decided March 15 at the World Cup Finals in Lenzerheide, Switzerland.

“Now the GS title isn’t so far away, but it’s still kind of far away with the mistakes I’ve made so far this year,” Ligety added. “I’m just skiing race to race and wins are always important even if they don’t go for the title. At this point the giant slalom globe isn’t a huge goal of mine. I have to win and he has to falter, which is not a really good strategy. If it was anybody else besides Marcel I would say it’s doable, but Marcel is not the kind of guy that gives anybody any gifts.”