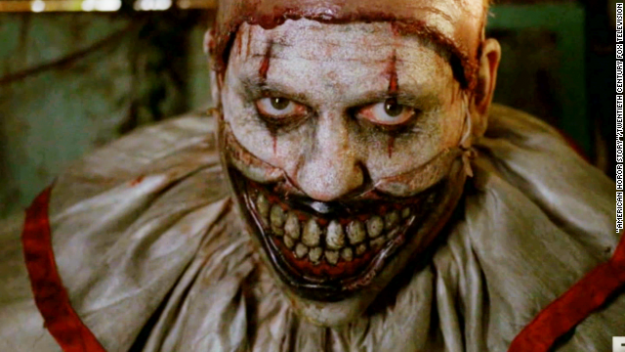 Creepy clowns have been seen in Eagle County (CNN photo).

The Eagle County Sheriff’s Office issued a press release Tuesday about the creepy clown sightings, which began on social media and appear to be escalating nationally through copycats. The sheriff’s office reports that growing “concerns include sightings in Eagle County.”

Being creepy isn’t a crime, according to police, but harassing or threatening  behavior is, and authorities say they will be on the lookout locally. Here’s the full release from the Eagle County Sheriff’s Office:

Eagle County Colo. –The Eagle County Sheriff’s Office has received several calls from concerned citizens about the spike in Creepy Clown sightings across the nation.  Concerns include sightings in Eagle County and the potential effects on our community. With Halloween approaching, parents and community members are feeling a bit anxious.

As of Tuesday, the Eagle County Sheriff’s Office has not received any credible threats or reasons to be alarmed.  However, the safety and well-being of everyone in Eagle County is our priority and the sheriff’s office personnel are aware of the communities concerns and will continue to monitor the situation.

Creepy is not a crime however, making threats or harassing others is and will be taken seriously and evaluated on a case by case basis.

With Halloween rapidly approaching, a reminder about safety is an order.  In light of the situation, it is recommended to steer costume choices away from creepy clowns and remember to always Trick-or-Treat with younger children before dark, travel together in larger groups with proper lighting and with adult chaperones and to check candy at home before consuming.

As law enforcement agencies across the nation are stepping up and increasing patrols, community members should remain vigilant and aware and always report any suspicious activities.

If you think you may have any information about a crime we want to know, please call the Eagle County Sheriff’s Office at (970) 328-8500 or Eagle County Crime Stoppers at 970-328-7007, 1-800-972-TIPS, submit your tip online at www.tipsubmit.com, or text a tip from your cell phone by texting STOPCRIME plus your message to CRIMES (274637).  If your tip leads to the arrest and indictment of any suspect involved, you could earn up to a $1,000 reward from the Crime Stoppers.