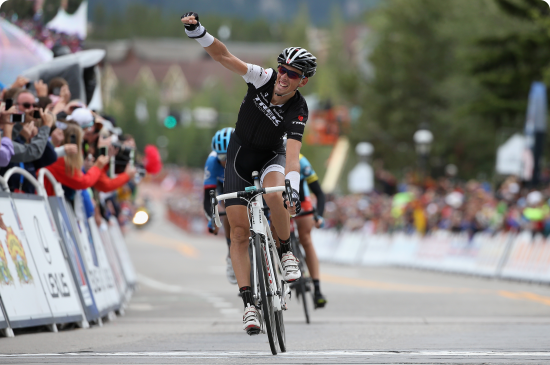 Stage 5 of the 2014 USA Pro Challenge took the riders on a challenging and soggy route from Woodland Park to Breckenridge where an attack in the last few miles of the race would take Laurent Didier (LUX) of Trek Factory Racing all the way to the finish. Overall leader and defending champion Tejay van Garderen (USA) of BMC Racing Team held onto his 20 second lead and will wear the yellow jersey leading into the individual time trial tomorrow in Vail.

“It was definitely a tough day,” said van Garderen. “The breakaway took a really long time to get along and my team had to control it the whole time. That, coupled with the cold and the rain, made it pretty hard, especially on my team because they had to pull all day.”

Starting in the new host community of Woodland Park, Stage 5 headed west then north through some of the most picturesque terrain in Colorado. After traveling through the Pike National Forest on Tarryall Rd. the race hit Fairplay, which will began the long grind up 11,500 ft. Hoosier Pass, the highest point in the race. Then they continued on to Breckenridge, where a final climb up Boreas Pass would take them to the finish downtown.

“We visited two incredibly enthusiastic host cities today for Stage 5 of the Pro Challenge; as a first-year host, Woodland Park had a really impressive turnout and Breckenridge, a fourth-year host, had some of the biggest crowds we’ve seen thus far,” said Shawn Hunter, CEO of the Pro Challenge. “These riders really put it all on the line, conquering some tough terrain in some pretty nasty weather. The fans and the cyclists really showed their dedication today.”

After a 3.3-mile neutral start in light rain, the riders took off on their way to Breckenridge. Traveling at speeds of more than 30 mph, a group of eight riders broke away about eight miles into the stage. With Optum p/b Kelly Benefit Strategies leading the chase, the group was brought back together at 23 miles into the stage.

Keeping a steady pace, the race strung out single file as the riders continued on. At 30 miles into the stage, 11 riders pulled away to gain a slight advantage, but were quickly reeled back in. Shortly after that though, an attack was launched off the front that would finally stick. The group included Daniel Eaton (USA) of Bissell Development Team; Luis Lemus (MEX) of Jelly Belly p/b Maxxis; Scott Zwizanski (USA) of Optum p/b Kelly Benefit Strategies; Richard Handley (GBR) of Rapha Condor JLT; Robin Carpenter (USA) and Chris Butler (USA) of Hincapie Sportswear Development Team; Rob Britton (CAN) of Team SmartStop; Jai Crawford (AUD) of Drapac Pro Cycling; José Mendes (POR) of Team NetApp-Endura; Christiano Salerno (ITA) of Cannondale Pro Cycling; Ben King (USA) and Janier Acevedo (COL) of Team Garmin-Sharp; and Didier.

With the gap reaching up to more than four and a half minutes at the halfway point of the stage, the riders faced some nasty weather conditions with heavy wind and rain. The gap started to fluctuate a little bit, but not varying much overall. At about 66 miles into the race Carpenter fell off the break to rejoin the peloton.

The break started to reach lighter rain and brighter skies as they headed toward the first and only Lexus Sprint Line of the day in Fairplay. With fans out to cheer on the riders at the line, even in the rain, Lemus got there first, followed by Crawford and Handley.

As the leaders entered the town of Alma, BMC was setting the pace on the front of the chase behind, as they had been for most of the day. Starting on the first Sierra Nevada KOM competition of the day – Hoosier Pass – the gap came down to about three minutes. At 25K to go, less than 2K to the top of Hoosier Pass, which features an average grade of six percent and a max of eight percent, there started to be some separation in the break.

At the top of the pass, where it was only 49 degrees, the gap dropped to two minutes and 45 seconds, with Didier going over first, followed by Acevedo and King. On the descent, Didier pulled off the front to create a solo break. Lemus followed behind to start the chase and close the gap. Soon after, two other riders caught up to create a break of four that included, Didier, Britton, King and Acevedo.

“It was sprinkling, but I was a lot more dry toward the end of the stage than the rest of the day,” said King. “That high altitude is also cold. Then, you have that 15 minute descent when you’re not pedaling much and you get even colder.”

With a chase of five riders coming close behind them at only 45 seconds back, the break would have to push it to hold on until the end. Knowing it was now or never, Didier attacked on the final climb up to Breckenridge on Boreas Pass. Simultaneously, current overall leader van Garderen attacked out of the chase group with two other riders following behind. With now clear skies, the finish was not far away.A Cat. 3 climb at 10,087 ft., Didier crested the Boreas first, followed by Acevedo and Britton.

With 1K to go, Didier was holding his lead, but Britton and Acevedo weren’t far behind. Pushing it and giving his all through the final moments of the race, Didier was able to hold his lead and take the stage. Crossing right behind him were Acevedo in second and Britton in third.

“Today, I didn’t feel that good in the beginning. The first 40K was quite hard, but I was in the front at one point,” said Didier. “The really big thing here is the altitude. When I talk to other people about it, they really don’t understand until they actually experience it. When you’re in Denver, you’re going flat, but you’re already about 1,800 ft. up. In Europe, 1,800 ft. is the top of the climb and in Denver, we’re already there.”

In other exciting news, Trek Factory Racing’s Jens Voigt (GER) will be giving away the bike he rode during the 2014 Tour de France through a sweepstakes on the 2014 USA Pro Challenge Tour Tracker mobile app. To enter to win the Trek Madone Team Edition bike, fans can download the free USA Pro Challenge Tour Tracker mobile app on iTunes and Google Play. Then, click on the “more” button at the bottom of the screen and complete the entry form. Entries will be accepted starting today (Friday, Aug. 22) through Sunday, Aug. 24 at 11:59 p.m. MT. Applicants must be over 18 years of age and a legal resident of the U.S. to win. The winner will be selected and notified on September 2. For full rules and details, please log on to prochallenge.com/Jens.

Last year the USA Pro Challenge visited Vail, and the time trial was decided by four seconds. In three visits to the Vail individual time trial course, this was the largest margin of victory. Competition will be equally fierce this time around, but the names may change a bit. The course’s roots are in Colorado racing lore and trace back to the Coors Classic. Starting in Vail and climbing most of the way up Vail Pass the route is no easy proposition, even for the best riders on earth. The gentle grades of the first half of the course give way to a steady climb for the last three miles. It takes more than legs on this strategic course though; go too hard early and the climb may kill your chances, but conserve too much for the climb and the leaderboard may be out of reach.

Fans can view the race on the daily NBC Sports Group broadcasts. The Stage 6 schedule is as follows: