Copper Mountain started snowmaking on its U.S. Ski Team Speed Center last week to get ready for the U.S. Alpine Ski Team’s annual training. But this season, with the Sochi Winter Olympics only four months away, the stakes are much higher.

Copper now has about a month to make snow before the Nature Valley First Tracks Alpine Team Naming event on Nov. 8 — a free-to-the public pep rally to kick off the ski and snowboard season and introduce gold-medal athletes such as Bode Miller, Ted Ligety, Lindsey Vonn, Julia Mancuso and Mikaela Shiffrin. 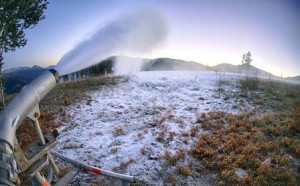 “The U.S. Ski Team Speed Center at Copper was a huge step forward in supporting ski racing in North America,” said Ligety, an Olympic gold medalist and four-time world champion. “It’s cool to now see that support evolve into a fan event that kicks off our road to Sochi and celebrates the start of the ski season.”

Nearby Loveland and Arapahoe Basin started making snow late last month and should open to the public by mid-October, and Telluride also recently started its snowmaking equipment. Another fall snowstorm blasted through the state on Friday and provided fresh snow and much colder temperatures ideal for snowmaking. However, things are warming up this week before the next round of snow later in the week.

“This has been great. We are close [to opening],” A-Basin COO Alan Henceroth wrote on his blog on Sunday. “Let’s hope the warmer weather doesn’t last too long.”

Copper Mountain is looking to take advantage of the colder temperatures and natural snow to open to the public and allow training to begin on Nov. 1.

“Copper Mountain is the early-season location stateside where guests can experience Olympic mania in the days leading up to the 2014 Olympic Winter Games in Sochi,” said Jesse True, Copper’s vice president of marketing and sales, “We are honored to host the U.S. Ski Team First Tracks event, kicking off the team’s Olympic season.”

The full-day event on Nov. 8 allows fans to catch the U.S. Ski Team training, participate in a parade and official naming ceremony and then catch athlete autograph sessions and headlining live music in Burning Stones Plaza in Copper’s Center Village.

Vonn, a 2010 Olympic downhill gold medalist, is coming off a knee injury suffered in a crash at the World Championships last season. On Wednesday she said she felt good training on snow in South America recently, is ahead of schedule with her rehab and may be able to race later this month at the World Cup opener Oct. 26-27 in Soelden, Austria.

Miller, also coming back from knee surgery in Vail that cost him all of last season, has said he’s on track to return to his full five-time Olympic medal-winning form. The Sochi Winter Olympics are schedule for Feb. 7-23.

If Vonn and Miller both make it back for the opening giant slalom in Soelden, they would then have another month on snow before World Cup races at Beaver Creek in late November and early December.

The women debut the new “Raptor” downhill course Nov. 29-Dec. 1, with the men returning to the legendary Birds of Prey course the following weekend on Dec. 6-8.