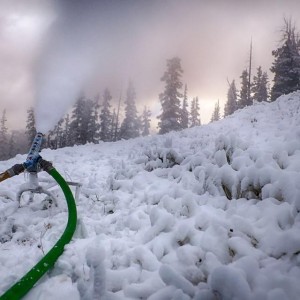 Copper, which saw more than two inches of new snow overnight, is scheduled to open to the public for the season on Friday, Oct. 31. U.S. Ski Team athletes will start training before then on the U.S. Ski Team Speed Center at Copper Mountain in preparation for the 2015 FIS Alpine World Ski Championships to be held at Beaver Creek in February.

Arapahoe Basin officials on Tuesday were still weighing the merits of starting snowmaking operations, saying temperatures and humidity were both a little high.

“Tonight looks to be similar with high humidity and temps in the high 20’s,” A-Basin COO Alan Henceroth wrote in his blog. “Now Wednesday night looks to be another story. Right now temps are forecast down to 20 F or maybe even colder. I hope we are delivering some good news on snowmaking Thursday morning.”

A-Basin won the race to open first in Colorado the last two seasons by cranking up its lifts on Oct. 13 last year and Oct. 17 the year before. Loveland followed closely behind on Oct. 17 and Oct. 23.

“Last night Loveland got a nice dusting of snow,” Loveland officials reported on the ski area’s website on Monday. “Our snowmakers are hoping to fire up the guns later this week. Loveland is still tracking for a mid-October opening.”

Aspen Mountain and Snowmass are both set to open on Thanksgiving Day, Nov. 27.

Meteorologist Joel Gratz of Opensnow.com is calling for more new snow up high on Wednesday: “A stronger storm will drop 3-6 inches of snow across northern and central Colorado on Wednesday afternoon, then Thursday through early next week will be dry.”