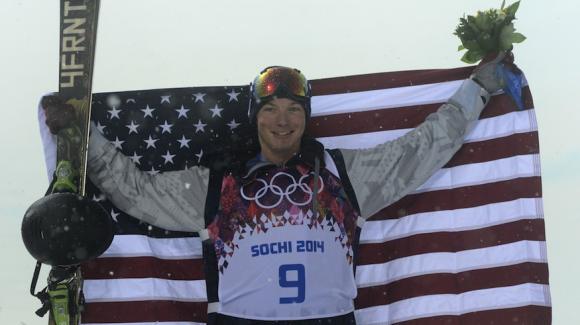 Reno’s David Wise made sure an American claimed the first ever Olympic halfpipe skiing gold medal as the X Games staple wowed the wet and wild crowd at the 2014 Sochi Winter Olympics. Mike Riddle of Canada and Kevin Rolland of France took silver and bronze, respectively.

Aspen’s Torin Yater-Wallace, a medal favorite and X Games medalist, looked poised to crack the final 12 in the rain-spattered qualifying round earlier in the day but couldn’t land his final trick and missed the big show.

Boulder’s Lyman Currier, who came back from a 2012 knee injury to reestablish himself on the World Cup circuit and qualify for the Games, injured his knee in Tuesday’s qualifying round and missed the final. Numerous athletes failed to finish the qualifying round during the day Tuesday as the halfpipe deteriorated in the pounding rain.

Wet, falling snow affected the athletes’ speed in the halfpipe, but many were able to manage it, keeping their momentum through the transitions and adjusting the type and sequence of tricks in their runs.

“It’s amazing,” Wise said. “It’s always rough when the conditions aren’t perfect and you don’t get to do the runs that you were hoping to do. I’ve had a Sochi run on my mind for a long time that I really wanted to throw down tonight, but you guys will just have to wait to see that one.

“I’m really proud of freeskiing tonight. The riders all came out, stepped it up and put on a good show in spite of the rough conditions. I’m happy to have landed my run and it’s an amazing honor.”

Blunck had to sweat out more than an hour of halfpipe skiing during qualifying as he sat in the 12th and final position with a score of 72.00. One freerider after another either failed to finish or couldn’t top his modest score.

“That was the most nerve-wracking time in my life,” Blunck said. “I was just sitting there up top, wasn’t talking, had my face mask over my mouth, kept closing my eyes and just hoping for the best but kind of expecting the worst. I’m stoked that I even made finals and to get seventh place, it was just awesome.”

“The snow is sticky,” Blunck said. “It’s humid here, so it’s definitely something we’re not really used to after competing in Colorado and Utah all the time. We’re used to that dry, fluffy snow when it snows — that stuff that you can clear out and still get speed. We’re all dealing with the same thing, though.”

Blunck, 17, was pumped for Wise and the sport in general.

“David has been skiing almost better than anyone else here,” Blunck said. “So it’s been awesome to see. He charges every day, every night. It’s awesome for a guy to come out and have his family behind him.”

Halfpipe skiing was just added to the Olympics in 2011.

“It’s been the experience of a lifetime,” he said. “I didn’t really think 2014 was possible a couple years ago, and then all of a sudden last year I thought, ‘This is kind of possible!’ Now it’s just been a dream come true. I’ve just been taking everything in.”