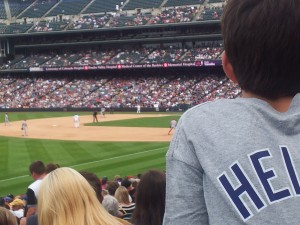 Too late, Dick Monfort, to put the genie back in the bottle. You can apologize and dissemble all you want, but now we know how you really feel.

If fans of the Colorado Rockies “Major League” (in name only) baseball team that you own don’t like the product on the field, we should all just stop coming to the games.

That’s what Monfort emailed one fan from Grand Junction who had the audacity to complain after driving 250 miles and dropping a massive amount of cash to watch his team get manhandled and outclassed by a free-spending Los Angeles Dodgers team that will once again win the National League West.

And then, Monfort went on in an exchange with another fan, if we all stop coming and overpaying to watch his underachieving collection of minor leaguers managed by a former high school coach, then maybe we don’t deserve a team at all.

Really? After 20 years of blindly supporting a grand experiment in abject mediocrity — supporting it in droves and with our wallets wide open — you think you should be able to pick up and move on to the next group of more-deserving suckers in some other city?

If that’s anything more than just an empty threat – and we now know it’s what Monfort is actually thinking because knee-jerk reactions typically come from the heart – then the collective fandom of the Colorado Rockies should lawyer up now and start prepping a massive class-action lawsuit in order to get our tax money back for building the ingrate Monfort a great stadium like Coors Field.

MLB knows Denver and the entire Rocky Mountain West region readily supports baseball, even wildly subpar and terribly mismanaged baseball (15 out of 22 seasons have been losers). They also know the real problem is ownership and its clown-car full of executives who should have been driven out of town and off a cliff years ago.

So if MLB lets Monfort walk, then Bud Selig and his boys ought to be named in the same lawsuit.

Enough, we should say. Enough of millionaire and billionaire bumblers who only know how to soak the taxpayers for bigger and better stadiums and the fans for more and more of their hard-earned cash by adding lavish restaurants we can’t afford instead of flame-throwing lefties who aren’t afraid to challenge hitters at high altitude.

Spend some money on the on-field product, Dick, and oust Dan O’Dowd. Show us you’re serious. Otherwise, fans do need to stop enabling your annual larceny, and when you try to move the team we ought to make sure MLB fires you, not the city of Denver and an entire region of dedicated and discerning fans.

I just laid my Dad to rest – a lifelong season ticket-holder with a very low number dating back to Mile High Stadium in 1993. I told him before he died to stop enabling the Monforts, but he remained loyal to the end.

I voted for the stadium tax as a Denver resident in the early 1990s. I was in the press box in Mile High when Eric Young Sr. went deep to lead it all off. I interviewed Young and the Big Cat and others in the locker room afterwards. So much hope back then, so much promise. We were the NL wildcard in our third year in 1995!

But other than one miracle run that put the Rockies in the World Series against the steroid-soaked Red Sox in 2007 and a crushing collapse by closer Huston Street in the Division Series in 2009, there’s been nothing but bad baseball on Blake Street ever since.

And now we’re not allowed to even complain about it or Monfort will pick up his game and go home. As an Eagle County resident who has to travel 130 miles to the games, I typically only go to a few a year. Now I know that even that effort isn’t appreciated by the owner, who seems to think I ought to just grin and bear it.

Well, I used to bear it a lot, paying a few bucks on Wednesdays afternoons in the 1980s to watch the Denver Bears (later Zephyrs) at Mile High when I was a student at Metro State. At least that triple-A product came with a triple-A price tag.

Monfort told another fan to stop going to Rockies games and settle for the Sky Sox in Colorado Springs. Not a bad suggestion. And I have one for the Rockies brass, since you clearly won’t get fired and will be allowed to continue soaking us suckers: Don’t let Dick answer any more emails.

Instead, buy Dick some earplugs and tell him that with his extra time he should fill up the empty hours studying real Major League owners and managers. And finally, tell Dick to quit being, well … a dick.