Chris Del Bosco, who grew up in Eagle-Vail and lives in Montreal, was named to his second Canadian Olympic team today and will compete in ski cross at the 2014 Sochi Winter Olympics. 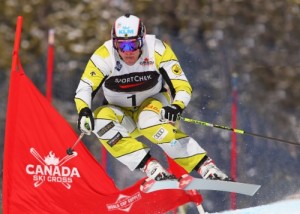 Del Bosco is joined on the team by Dave Duncan and Brady Leman.

Ski cross made its Olympic debut in 2010 when Whistler’s Ashleigh McIvor – who has since retired – won gold on the women’s side. Del Bosco, going for the gold, crashed and wound up fourth at those Games.

Canada’s ski cross team has been ranked No. 1 in the world in four of the past five years, and the six nominated athletes (three on the women’s side) include World Cup winners, world champions, X Games gold medalists and a Crystal Globe winner.

“All three of us on the men’s team are heading into Sochi looking for redemption,” said Del Bosco, who has dual U.S.-Canadian citizenship. “We all feel like we have a second chance.

“We all have the potential to go out there and win gold and that’s what we’ll be trying to do. Canada has been the top ski cross nation in the world for four of the past five years and we have nothing to fear in Sochi. We believe this is our year.”