While the 2015 FIS Alpine World Ski Championships in Vail and Beaver Creek will showcase the world’s top ski racers, the event will also serve as the canvas for one of this country’s premier artists as internationally renowned painter and Vail gallery owner Carrie Fell has agreed to become the Official Artist for the 2015 Championships.

In addition to creating the artwork for the official World Championships poster, Fell will also be working with local children to create a special art piece, while also embarking on other unique merchandising, marketing and design concepts throughout the event. 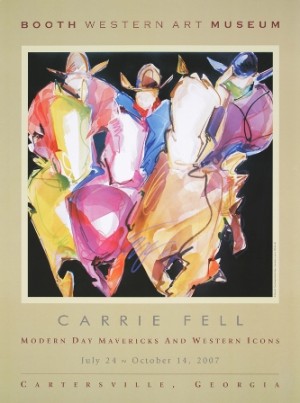 “We are honored and excited that Carrie has agreed to be our Official Artist,” explained Ceil Folz, president of the Vail Valley Foundation and head of the 2015 World Championships Organizing Committee.  “Her willingness to immerse herself and her fantastic talents throughout the Championships shows her tremendous commitment to the Vail Valley and giving back to our community.”

Fell’s art depicts the traditional icons of the Old West with a thoroughly modern twist, using vibrant colors and fluid forms.  Her colorful cowboys represent a spirit of the West, emerging as a modern tribute to America’s past.

Painting professionally since 1988, she is one of only two contemporary-style Western artists whose work was chosen for the prestigious 2003 “Legends of the West” exhibit at the George Bush Presidential Library and Museum in Texas.Her original work also hangs in the prominent permanent collections of the Booth Western Art Museum in Cartersville, Georgia and the Desert Caballeros Museum in Wickenburg, Arizona.  She opened her Vail gallery, located in the Solaris complex in December of 2011.

“When the Organizing Committee asked me to represent the 2015 World Championships,” offered Fell, “I began the invigorating prospect of painting America proud.  As an artist, I go to work with a vision to capture the colorful outlook by way of anticipation of the soul of this historic event; a visualization into the hearts of the American athletes and to the many athletes that will come here in the colors of the globe.”

Beyond creating art, Fell enjoys working with young students through her “Significance of Self Program of the Arts for Children”, which has been presented at schools in Colorado, Oklahoma and Tennessee, featuring a curriculum that helps children express their inner passions through the medium of art.

Fell comes by her affinity for the Vail Valley naturally, having grown up skiing with her family in Vail.

“I have always been called to this area,” Fell added.  “My parents loved to ski here and it’s where my siblings and I learned to ski.  Each weekend, crammed and excited in the back of our groovy customized black pin-striped Chevy van, my family made the long trek from Denver through the congested two-lane Eisenhower Tunnel, barely containing ourselves until we reached the base of the gondola.”

For additional information on the 2015 FIS Alpine World Ski Championships in Vail and Beaver Creek, visit www.vailbeavercreek2015.com.  For more information on Carrie Fell, check out www.carriefellgallery.com.