The Eagle County Coroner’s Office investigation into human skeletal remains found Thursday in Vail and Edwards will continue Saturday with the help of detection dogs trained in finding human remains. 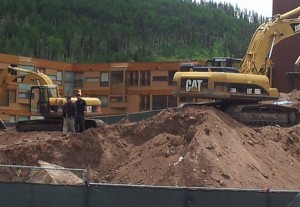 While retrieving the skull in Edwards, officials also recovered a jawbone and four vertebrae, but no additional remains were found in Vail on Friday.

Dr. Melissa Connor, archaeologist and associate professor of forensic science from Colorado Mesa University, is working with Eagle County Coroner Kara Bettis to scrape and sift through soil at the redevelopment site. Bettis is trying to determine the age, gender and identity of the remains.

Friday’s search area was adjacent to the South Frontage Road in Vail and outside of the footprint of the two demolished condo/hotel buildings on the site that were constructed in 1973 — the Lionshead Inn (formerly L’Ostello) and the Vail Glo Best Western.

Construction on the new condo and commercial project on the site called The Lion has been suspended.