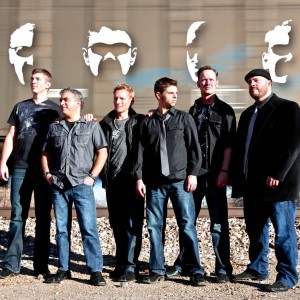 FACE is an all-vocal rock band from Boulder, Colorado that has been thrilling audiences for over a decade. Using only five voices and a beat boxer, FACE creates a high-octane rock music phenomenon that must be seen to be believed. The band competed on the hit NBC series The Sing Off, as well as America’s Got Talent, and in 2013 was named “Best Local Band” by Denver A-List Awards. Critics and fans nationwide describe FACE as “nothing short of spectacular,” “a six-voice bomb blast,” and “among the top ten singing groups in the country.”

Nationally, FACE has touched crowds from San Francisco to Chicago, Dallas to Minneapolis, as well as headlining at Detroit’s famous Fox Theatre and Planet Hollywood in Las Vegas. Having recently released their fifth album, FACE regularly performs for sold-out audiences in their home state. They have also shared the stage with Clint Eastwood, John Bon Jovi, and country star Pat Green among other greats. FACE has had the opportunity to sing for former Presidents George H.W. Bush and Bill Clinton.

With their incredible vocal harmonies, heart pounding vocal drums and more than a touch of humorous stage presence, FACE has proven themselves to be a world class act for audiences of all ages.