Bode Miller, who’s won a world championship in every ski-racing discipline except slalom, declared himself “ready to race” Monday at the 2015 Alpine World Ski Championships at Beaver Creek. 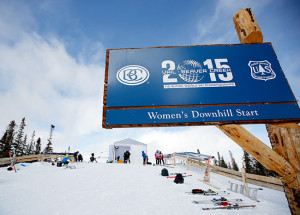 Miller, the most decorated male ski racer in the history of U.S. ski racing, is coming off back surgery this fall and has not yet raced in a regular-season World Cup event. He did manage to forerun races in Wengen, Switzerland and Kitzbuhel, Austria, last month.

“Luckily, I got through those races in Europe, even though I didn’t race,” Miller said in Beaver Creek Monday. “As far as what I hoped, everything went as well as I could have hoped. I’m here and ready to race.

“Coming in here for World Championships — if [coach] Sasha [Rearick] puts me in there — I’m going to try and win the races.”

As far as Worlds go, he and Ted Ligety are tied for the fifth most Alpine World Ski Championships medals all-time with five apiece — each with four golds.

Ligety has won four World Championships golds (GS, combined and super-G at Schladming in 2013 and GS in Garmisch in 2011) and a GS bronze in Val d’Isere in GS in 2009.

“Defending all three gold medals here would be a dream come true, but it’s not necessarily the most realistic expectation,” Ligety said of his magical run at the last Worlds in Schladming, Austria, in 2013.

“I’m not really getting nervous about it. I’m going to try and ski hard. I think those hills are really good for me, so if there’s a place for it to be possible for me to repeat, this is one of the better places. But it’s not something I’m consumed with.”

Ligety has won five times at Beaver Creek on the regular World Cup circuit, all in GS.

The men get underway on Wednesday, Feb. 4, with the super-G on Birds of Prey at 11 a.m.

The women kick out of the start gate today at 11 a.m. with the super-G race. They got in one training run of downhill on Monday, with American Stacey Cook leading the way, and hometown favorite Lindsey Vonn in fourth.

All races are free and open to the public. Go to the official website for more information.