Formed in Colorado in 1986, Big Head Todd and The Monsters have played together for nearly three decades, first gaining popularity in the mountain states before catapulting into the national spotlight. Together the band has sold more than three million albums and headlined packed venues worldwide, including sold-out shows at Colorado’s historic Red Rocks Amphitheatre. 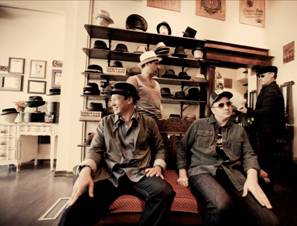 Big Head Todd and The Monsters.

Combining a mix of musical genres, with original songwriting and scorching guitar licks, Big Head Todd’s success is no mystery and continues with the their eleventh studio album, Black Beehive, set for release in 2014.

Big Head Todd and The Monsters will join co-headliner Matisyahu on stage at Vail Snow Daze for a free live concert on Saturday, Dec. 14. Rebelution, with opening act MiM0SA, will entertain guests on Friday, Dec. 13.

All Vail Snow Daze concerts are free of charge and will be held at Vail’s Ford Park. The schedule of activities for Vail Snow Daze 2013 will also include the return of the sponsor expo village and gear demos at the base of Gondola One, Dec. 13-15, as well as après and after-dark parties in the Town of Vail throughout the week.

A limited number of Private Reserve tickets are available for purchase and include a preferred viewing area, private entrance, complimentary food and beverage and a rocking party! Please check www.vail.com/snowdaze for more info.