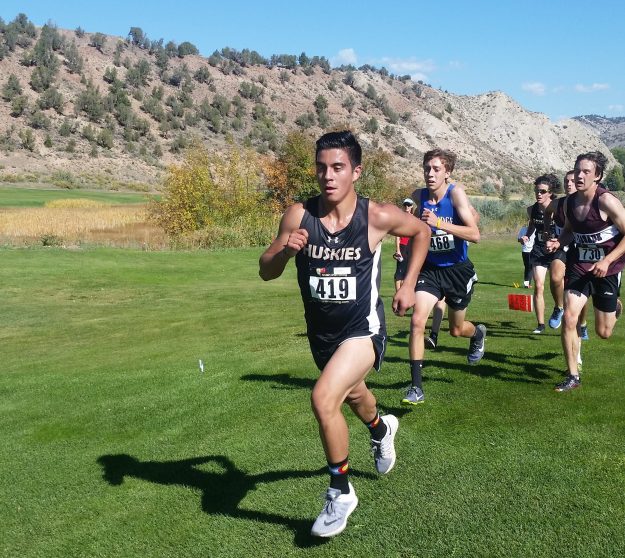 Battle Mountain’s Alexis Aguirre bolts to the finish in Saturday’s Eagle Valley Invitational with the Huskies’ Nick Williams in the background. The two helped secure the boy’s team title on Saturday.

The Battle Mountain High School boy’s cross-country team is so deep that the Huskies competed without some of their top runners on Saturday and still won the Eagle Valley Invitational in Gypsum.

Kelley turned in a blistering time of 16 minutes, 21 seconds, and Reilly came in second at 17:03, holding off hard-charging Glenwood Springs sophomore Henry Barth at 17:06. That was important as a loaded and solid Glenwood squad was angling for the overall win.

In its race preview, MileSplit.com reported the Huskies have been struggling in fits and starts this season and that Glenwood was poised to show it’s the new sheriff on the Western Slope. But that’s where Battle Mountain depth came into play.

On a squad so deep that runners are battling every week for varsity versus JV slots, Huskies’ senior Alexis Aguirre finished 18th with a time of 17:58, and junior Nick Williams came in 22nd with a time of 18:01. Junior Conner McCabe was 27th (18:11), and sophomore David Reilly, Franklin’s brother, rounded out the scoring for the Huskies in 29th (18:15).

Besides Barth in third, Glenwood sophomore Gavin Harden finished ninth (17:44) and junior Mathew Thrun was 30th (18:16), but the Demons didn’t put any other runners into the top 30. Battle Mountain’s young Huskies stepped up and took the team title – their second of the season after winning the school’s home meet at Beaver Creek on Sept. 3. That race is considered one of the toughest in the nation.

“It’s always fun to see when you put your younger runners in a leadership position and see how they react,” Huskies coach Rob Parish told the Vail Daily. “They reacted well.”

MileSplit.com delivered this post-race assessment of the team competition:

“Battle Mountain, running without a number of varsity regulars, figured to be dumped by a Glenwood Springs squad that has looked very good thus far this season. But, a tone was set by Franklin Reilly overtaking Henry Barth in the last 100 meters. Battle Mountain ended up scoring 2-8 then a 28-30-32 in rapid succession to send Glenwood back into recalculating mode.”

Battle Mountain had another six runners in the top 50, with four of them coming in under 19 minutes, and overall the Huskies boy’s wound up winning the boy’s team title by 11 points over Glenwood. The Battle Mountain girl’s team, also resting a lot of its top runners, finished second in the team competition, with junior Megan Bamford turning in the top result in 10th (21:16).

The Huskies on Saturday travel to the Anna Banana Invitational in Grand Junction – also the new site of regionals on Oct. 20.