Cross is boss at Battle Mountain but soccer, skiing not too shabby either 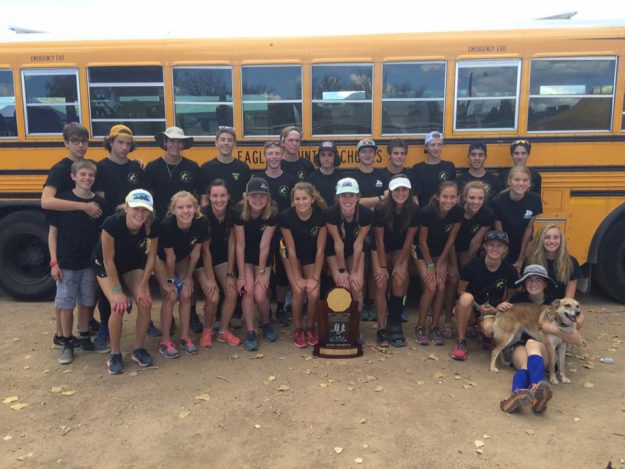 Battle Mountain High School is on a championship roll of late. The boy’s soccer team is gunning for its second state championship in the last four years on Saturday at Dick’s Sporting Goods Park in Commerce City (match starts at 1 p.m.), and the girl’s cross-country running team just took home the state title Oct. 29 in Colorado Springs.

If you’re counting, that’s four boy’s and girl’s state cross-country titles for coach (and principal) Rob Parish, while soccer coach Dave Cope is seeking his second state title. Not trying to stoke a rivalry or anything, but the kids who run a lot while dribbling a ball have some catching up to do on the kids who just run … and run … and run.

Speaking of, thanks very much to everyone who came out and supported the cross-country team Wednesday night at the Main Street Grill in Edwards. It was a huge success as the team raised money for its annual invite to the Nike Cross Nationals Southwest Regionals race in Casa Grande, Arizona, on Saturday, Nov. 19. This is a big-time test of where all these incredibly hardworking young athletes stand nationally.

Parish and his outstanding cross-country program have landed nearly four dozen student-athletes in college running  programs across the nation over the years, and not enough can be said about the dedication and determination he inspires in his young student-athletes. I would like to also personally thank Main Street Grill owners Chris and Nikki Heiden for hosting our fundraiser, CME’s John Dawsey for his van donation, and everyone else who contributed a slew of silent auction items to make this amazing trip possible for these inspiring kids.

While the boys were a respectable seventh at the state championships, the girls were dominant, with Elizabeth Constein and Naomi Harding finishing second and third in the state. All either freshmen, sophomores or juniors, the girls squad will no doubt be back in the hunt next year, so it’s key that they keep running and testing themselves against the best in the state and the nation. Thanks again to everyone who contributed or helped organize for Nike Camp.

On the topic of fundraisers, there will be another one from 5 to 10 p.m. Sunday, Nov. 13 at the Northside Kitchen in Avon (thanks to Northside owner and my former boss at the Vail Daily, Jim Pavelich) for World Cup mogul skier Tess Johnson — the youngest athlete ever named to the U.S. Freestyle Ski Team. Tess has a Battle Mountain connection, with her older sister Anabel Johnson a solid cross-country runner for the Huskies in the past.

All Tess has done in 2016 is follow up her two-goal performance in the 2015 girl’s high school soccer championship game with another goal in this year’s championship victory for Vail Mountain School. But where she really excels is in the bumps, where this year she was the NorAm moguls champ, second place at Junior Worlds and turned in a solid showing at the Deer Valley World Cup in Utah.

But the World Cup tour (where she was just named a starter at Ruka, Finland next month) ain’t cheap, so any help in getting her to the top of a podium and on to Olympic glory in 2018 would be greatly appreciated. Call the Northside at 970-949-4123 to make a reservation … and mention the Turns for Tess fundraiser (no rez necessary on the Benderz Burgers side, but still mention you’re there for Tess).

I was there as a journalist at the 2006 Winter Olympics in Italy when another local skier grabbed Olympic bronze in moguls, and I will always remember the smile on Toby Dawson’s face. Let’s help bring home more Olympic hardware for a Vail Valley athlete — in this case Tess Johnson of Edwards.

Also, Eagle-Vail’s own Olympic gold medalist Mikaela Shiffrin goes for another World Cup win in slalom this weekend at Levi, Finland, after finishing second in the GS at Soelden last month. Good to know there’s some snow somewhere.

Hard to really even think of skiing at this point, given the lack of snow in Colorado of late, but young athletes have been getting on what snow there is and doing a lot of dry-land training for when the flakes do start to fall. A lot of the Battle Mountain cross-country runners have already transitioned to Nordic training so they can begin their title defense as back-to-back boy’s state ski champions.

Even if the boy’s soccer team claims the title tomorrow (and I’m really hoping they do), they would need five more to match the boy’s ski team, which has collected seven state ski championships over the years, including the last two. The girl’s have added another three (last one in 1998 though) for an all-time school mark of 10 total skiing titles. Let the title defense begin, please pray for snow and, as always, go Huskies! 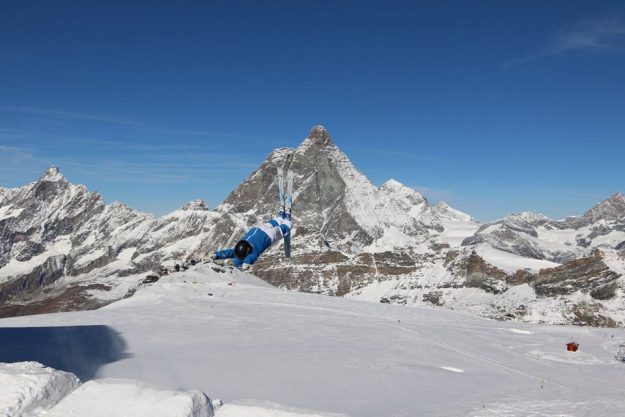 Tess Johnson flips out in front of the Matterhorn in Switzerland. Come support her Wold Cup season at the Turns for Tess Fundraiser at the Northside Cafe in Avon on Sunday night, Nov. 13.