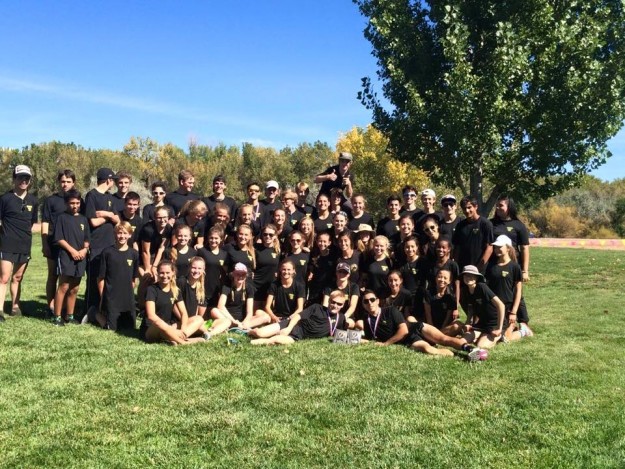 DELTA, Colo. — Battle Mountain Cross Country continued its historic season with a dominant performance at the Pantherfest Invitational on Friday. Both the boys and girls won the meet by a large margin.

“We were really excited with the team scores,” said assistant coach Max Van Dyke, “But even happier to see such strong individual races across the board.”

While most meets will run a Varsity race and a JV race, this weekend the Varsity races and JV races were combined, which led to some incredibly fast times. Battle Mountain had 54 athletes run under 30 minutes, and 28 run under the lettering times.

“Our team works so hard and it was great to see so many people set season and lifetime PRs,” said Van Dyke, “We had people running 30 seconds, a minute, and even 5 minutes faster than they have ever run before, and it is a testament to the work they have put in this season.”

Battle Mountain has spent the majority of its season down on the Front Range looking for races against the top 4A and 5A schools in the state, seeing Western Slope competitors only occasionally. Friday’s meet offered a chance to see 3 region teams the Huskies have not raced as much this year in Steamboat, Glenwood and Delta.

How did the Huskies handle the new faces? The girls put 7 runners in the top 10 and the boys put 7 in the top 14.

“We told some of our runners to pack up and use this race as a chance to preview the regional course and test out a different race strategy,” said head coach Rob Parish, “The girls had 8 runners together in a pack through two miles before anyone started breaking. For so many of them to set PRs after we said to stay together is really encouraging as we get closer and closer to the postseason.”

It’s one thing to have 8 runners run as a group, it’s another to have 8 at the front of the race. The lady Huskies were behind only Claudia Hirons from Glenwood Springs at the 2 mile mark in the race. As they turned the corner around the lake, Alex Raichart led the charge to chase Hirons down.

“Alex was about 30 meters back at a mile to go, and with 800 meters to go she had a 30 meter lead,” said Parish, “She put a monster move on 1st place and definitely earned the win and a nice PR.”

For the statistically inclined, that’s a 1-5 split of 27 seconds, the lowest of the year for the #2 ranked Huskies.

While the top 7 count as varsity runners for this meet, the Huskies had 7 MORE athletes run faster than the lettering time of 21:30. The following Huskies will also be receiving a varsity letter based off their performance at Delta:

The Husky Boys ran a similar style race next, if not quite as dominant. A group of 7 from Battle Mountain ran together through the mile and had to move up quite a bit before they got to two miles.

“The guys had some trouble at the start, when Glenwood took off I think their instinct was to go rumble with them right away,” said Parish, “But we wanted them to pack up first, and they maybe over corrected a bit.”

The Huskies were behind Glenwood’s top 4 at the mile, and it looked like they might have spotted them too much room early on in the race. That turned out not to be the case.

A group of 4 for Battle Mountain, moved up and by two miles had caught all but one Glenwood runner. Alexis Aguirre, Ethan Pence, Jake Borel and Franklin Reilly all moved together and at two miles the race was nearly locked up for the Huskies.

Aguirre and Pence cruised to a 1-2 finish each running a time of 16:30, besting the 3rd place runner 11 seconds.

Battle Mountain’s final scorer was Isaac Sotelo, coming back from an illness to run a nice PR of 17:24 good enough for 11th place.

Not to be outdone, the boys also had 14 runners run Varsity lettering times. In addition to the top 7 the following runners broke the 18:30 barrier:

“I don’t think we’ve ever had 28 runners letter in a season, let alone one race,” said assistant coach Jonny Stevens, “I think in 2007 the boys might have had 12 runners letter and that was a strong team that won the state title. For both the girls and the boys to get to 14 is astounding. They should be really proud of the way the program has grown and what a hard working group it is.”

The Huskies final meet of the regular season is this Thursday in Rifle, for most of the 60 person roster it will be one last chance to run hard and if this weekend is an indicator of anything, expect the team to rip.