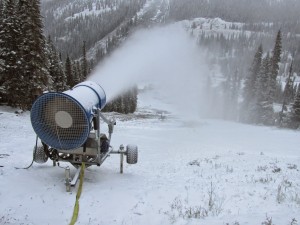 A-Basin, which beat out Loveland as the first ski area in the state to open the last two seasons (in mid-October), joins Copper Mountain, which cranked up its snowmaking on Tuesday and is set to open on Halloween.

“We are off to a terrific start,” A-Basin COO Alan Henceroth wrote at 7:37 this morning on his blog. “The temps starting dropping just after dark last night and the crew fired up. The overnight low was about 20 F at mid-mountain.

“For a few hours we had the system operating at maximum capacity. I walked Lower High Noon already [Thursday] morning. In addition to what the snowmakers produced, there is a fair bit of natural stuff on the ground. Let’s hope the forecast for a couple more cold nights holds true. Good, good, good start.”

Loveland sent out a press release at 9:58 a.m. Thursday  saying it had received 7 inches of new snow the last three days and that crews cranked up 17 snowmaking guns overnight Wednesday into Thursday morning.

Crews began making snow on the Catwalk and Mambo trails at the top of Chair 1 at 7 p.m Wednesday. Snowmaking crews will work their way down Catwalk and Mambo to Home Run, covering this top-to-bottom run with tree-to-tree coverage for opening day in mid-October.

“Our first night of snowmaking was very productive,” said Bobby Babeon, trail maintenance and snowmaking manager. “Mother Nature got us off to a good start and our team is ready to finish the job. We will keep making snow around the clock as conditions permit and the slopes should be ready for the first skiers and riders in just a few weeks.”

It typically takes about two weeks for Loveland’s snowmakers to cover the 1,000-vertical-foot run with an 18-inch base for opening day. Last season Loveland started making snow on September 27. A-Basin won the race to open first in Colorado the last two seasons by cranking up its lifts on Oct. 13 last year and Oct. 17 the year before. Loveland followed closely behind on Oct. 17 and Oct. 23.

“While most people dream of a white Christmas, here at Loveland we are focused on a white October,” said John Sellers, marketing director. “The natural snow we received gave us a bit of a head start this year and now our expert snowmakers are chipping in to prepare the slopes for opening day. We look forward to starting up the lifts for all the skiers and snowboarders that have patiently made it through another long summer.”

Meteorologist Joel Gratz of Opensnow.com is calling for a drying trend for the next week after several days of snowy weather.

“About 4-6 inches of snow fell on Wednesday and Wednesday night and the mountains are white as the sun rises on Thursday morning,” Gratz wrote today. “Expect dry weather for 7 days with the next chance for snow/rain around Thursday or Friday October 9/10.”