U.S. knocked out in semi-finals by bronze medalists Sweden 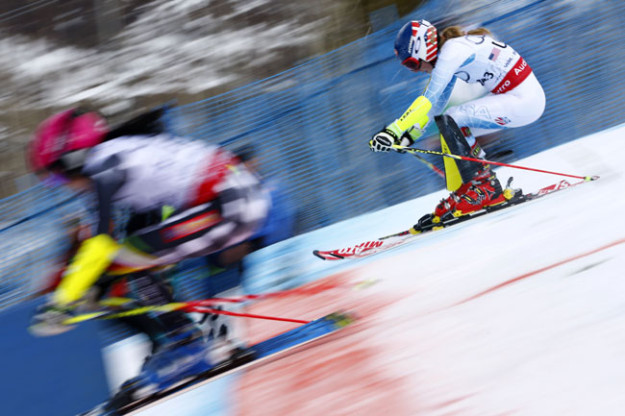 Austria gobbled up yet another gold medal at the 2015 Alpine World Ski Championships as the action moved to Vail for the Nation’s Team Event.

The action-packed parallel event, which is being promoted by the International Ski Federation for inclusion in the Winter Olympics as a medal sport, was filled with tight head-to-head battles among the 16 competing nations.

A favorite of the athletes who enjoy the team-sport camaraderie, the Nation’s Team Event also impressed the spectators at Vail’s Golden Peak with its March Madness, bracket-style elimination format. Austria has won a medal at every Worlds since the team event was first added to the program in 2005.

Sixteen teams of six athletes entered the event, and one of the biggest upsets came in the early rounds when Germany knocked off after Felix Neureuther couldn’t make up lost time as the fourth and final skier against Canada.

The first round also pitted USA, made up of Eagle-Vail’s Mikaela Shiffrin, Julia Mancuso, Paula Moltzan, Ted Ligety, David Chodounsky and Will Brandenburg, against Finland, which the U.S. took handily. Moltzan was victorious against Kristiina Rove, Chodounsky won against Eemeli Pirinen and Shiffrin took the win against Merle Soppela. Already qualified for the next round at that point, Ligety lost his race by .07 seconds to Joonas Raasnen.

After a successful first round, the coaches decided to have Moltzan, Shiffrin, Chodounsky and Ligety race the second round, with Mancuso and Brandenburg in the bullpen.

In the quarterfinals, the tricky, rutted-out course got the best of the Americans against Sweden. Both Moltzan and Chodounsky did not finish the race, which brought it down to Shiffrin and Ligety. Shiffrin narrowly won against Maria Pietilae-Holmner, but after getting stuck in the start gate, Ligety couldn’t catch up to the quick Mattias Hargin.

“This race is about quick feet,” Shiffrin said. “And the crowd is having so much fun because they get to see ski racing for two hours straight. It’s a consistent event. It’s really fun for the athletes too — to have a team to depend on and perform for. Also to be going up against someone who is right next to you the whole time is a totally different feel.”

Shiffrin said this race prepped her for the GS on Thursday.

“I’m really excited about the GS; I want to ski free,” Shiffrin said. “I was a little nervous in the first run today and I hate being nervous. Second run, I was like, what’s the point? If I’m going to be nervous and ski tense, then I shouldn’t even be out here. So I loosened up and put my best effort out there and that’s what I’m going to do for the GS. It was still a lot of fun.”

Austria won three of the four races against Switzerland in the semi-finals on Tuesday. Then Canada continued its unlikely run in the semi-finals, this time ousting Sweden, which had medaled in the last three World Championships in the Nation’s Team Event.

The Austria versus Canada final was extremely close, with the North American team fighting until the last skier. It was Canada’s first-ever World Championships medal in the team event, and their second medal at these championships in Vail-Beaver Creek.

Wednesday is an off day for the World Championships, and then action resumes on Thursday when the technical events take center stage at Beaver Creek with the women’s giant slalom. All the races are free and open to the public. Go to the official website for more information.

Shiffrin, who has a strong shot at a medal in Thursday’s GS, is among the favorites in her signature event of slalom on Saturday at Beaver Creek.

“I’m good to go; I’m feeling really healthy,” Shiffrin said. “Now it’s just about keeping my energy together for the slalom. I’m trying to be smart about which days I ski and which days I don’t. Obviously I have to ski on race day and I want to put 100 percent of my energy out there. This race was a really good warm- up. As I said, I was nervous, so it was good to get over the nervous barrier. Hopefully, I stay over it.”