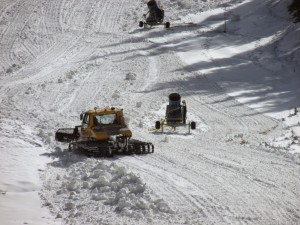 After reporting nearly 50 inches of snow in May, Arapahoe Basin Ski Area (A-Basin) will extend the Colorado ski and ride season for at least one bonus weekend, from June 12-14, 2015 (Friday, Saturday and Sunday). The ski area originally planned to close on Sunday, June 7, 2015, but winter reappeared in mid-April, dropping over 84 inches of snow on the ski area since April 16. A-Basin’s high base elevation of 10,780 feet, as well as recent cold temperatures, allow the ski area to remain open longer than any ski area in the state. A-Basin opened for the season on October 17, 2014, and is one of only three ski areas still open in North America.

“With our snowy and cool spring weather, the skiing conditions are better than we have seen for years at this time in May,” said Alan Henceroth, Arapahoe Basin Vice President and Chief Operating Officer. “We will be re-opening for at least one more long weekend.”

Regular ski area operations will continue through Sunday, June 7. After June 7, all ski lifts and skier services will be closed Monday through Thursday. The ski area will reopen for lift-served skiing on Friday, June 12, and remain open through Sunday, June 14, with limited skier services. During the bonus weekend, the Black Mountain Express and Lenawee Mountain lifts will run from 8:30 a.m. to 2:30 p.m. Terrain availability will be dependent on conditions; be sure to check our Terrain Status page before arriving at the mountain.

All information about skier services during our bonus “summer skiing” weekend can be found at arapahoebasin.com/summerski. Continue to check this page as information will be updated as the bonus weekend approaches.