After another blast of winter, Wolf Creek ski area set to open this weekend

A third Colorado ski area, Wolf Creek, is opening for the upcoming weekend after yet another blast of fresh snow moved through the state on Thursday.

Loveland Ski Area opened on Thursday and reported 6 inches of new snow Friday morning (plus another 2 inches after the snowreport), and Arapahoe Basin, which was the first ski area in North America to open last Sunday, reported 5 new on Friday morning. Both Loveland and A-Basin are now open daily through the spring of 2014. 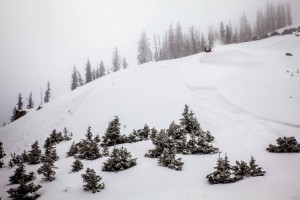 Wolf Creek, located in southern Colorado, will operate from 9 a.m. to 4 p.m. Saturday and Sunday, then shut down again during the week. Its full official full opening is set for Friday, Nov. 8.

The resort reports on its website that it recently received another 4 inches of new snow, bringing its year-to-date total to 28 inches and giving its trails a 22-inch base. Both the Nova and Bonanza chairlifts will be open Saturday and Sunday, as will the ski school and its Wolf Pup program.

Ski and snowboard rentals will be available at Treasure Sports, and burgers and a limited menu will be served in the Wolf Creek Lodge (upper lodge), as well as drinks at the Pathfinder Bar.

Cautioning that “conditions are very early season,” Wolf Creek is offering local appreciation rates of $38 lift tickets for adults and $22 for seniors and children. Go to the Wolf Creek website for more information.

“The snowmaking crew is hoping to have more terrain open by the weekend,” Loveland reported on its website Thursday. “Check out the progress on Spillway and Lower Richards.”

After a month of unsettled, cool and stormy weather, Colorado will settle into a drier, warmer weather pattern for the rest of October, according to Opensnow.com.

“We’ve had a 30 day stretch of consistent storms and cool air this fall, but this streak will not continue for the next 1-2 weeks,” Opensnow meteorologist Joel Gratz reported Friday morning. “As I talked about over the last few days, the stormy and cool weather will head to the eastern two-thirds of the country while the western third stays dry and warm.”