Americans back on track after super-G silver, bronze for Weibrecht, Miller 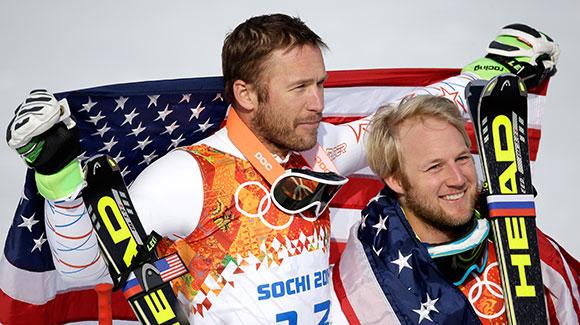 And just like that the U.S. Ski Team’s alpine squad is on track to have one of its most successful Winter Olympics in history.

Lake Placid’s Andrew Weibrecht, already a bronze medalist in super-G at Vancouver in 2010, started 29th and finished second to Norway’s Kjetil Jansrud Sunday in the men’s super-G at the 2014 Sochi Winter Olympics. Weibrecht, 28, has struggled mightily with injuries on the World Cup circuit, never posting a win, but he’s now a two-time Olympic medalist.

A shoulder injury right after his bronze-medal win in 2010 has plagued Weibrecht for years, and to date his best World Cup results were two 10th-place finishes in 2007 and 2011 at Beaver Creek.

“This is probably the most emotional day of ski racing that I’ve ever had,” Weibrecht said. “All the issues and troubles that I’ve had, to come and be able to have a really strong result like this, it reminds me that all the work I did to come back from the injuries and just dealing through all the hard times, that it’s all worth it and it all makes sense.”

Weibrecht, in fact, lost his U.S. Ski Team funding in the wake of so many poor results following his 2010 injury.

“There have been times I’ve had to evaluate whether this is really what I want to do, even as recently as yesterday,” Weibrecht said. “There are only so many times you can get kicked before you really feel it. I try not to focus on the results, but I really needed a result to remind me that I’m capable of this and that I belong here.”

Miller was just ahead of Weibrecht with a silver in super-G at the Vancouver Games in 2010. The gold medalist from those Olympics, Norway’s Aksel Lund Svindal, finished seventh on Sunday.

But Jansrud on Sunday continued Norway’s dominance of Olympic super-G with a time of 1 minute, 18.14 seconds. Miller and Hudec were seemingly tied for silver at 1:18.67, a little over a half a second behind Jansrud, when Weibrecht once again stunned the world with a second-place time of 1:18.44.

Norwegians have now won the last four Olympic super-G races and five of eight since the event was added to the slate at the 1988 Calgary Winter Olympics. Kjetil Andre Aamodt, the all-time record holder with eight Olympic medals, won the super-G three times.

Miller, 36, became the oldest Olympic medal winner in alpine skiing with his first podium of these games, topping Aamodt’s record win in 2006 at age 34. Nine different American men historically have won 17 Olympic medals in alpine skiing, and Miller can claim more than a third of those medals with six dating back to 2002 Salt Lake City.

“I’ve never been stuck on counting medals,” said Miller, who missed all of last season after a knee injury sustained at the Rosa Kbutor test event in 2012. “But I’ve put in a lot of work. This was a really hard year with a lot of effort coming back to get fit and get ready and just battle through everything life throws at you.

“To come out and ski hard … this is almost therapeutic for me to be in these situations where I really get to test myself. So I was happy to be on the right side of the hundredths. Some days medals don’t matter, and today was one of the ones where it does matter.”

Ted Ligety, the defending world champion in super-G, made a critical error and finished a distant 14th on Sunday.

A day after Sochi was widely declared a bust for the U.S. alpine skiers halfway through the 10 medal events, Americans now have three medals, which is tied for their fifth best total ever (1960 Squaw Valley). The next best totals came in 1964 Innsbruck (four medals, no gold) and 1994 Lillehammer (four medals, two gold).

But don’t count out Miller — the only American man to ever medal in GS with a silver at Salt Lake City in 2002 – or Julia Mancuso, the 2006 gold medalist in GS at the Torino Games.

Still no American man has won more than one Olympic gold medal in alpine skiing. Ligety, the gold medalist in combined at the 2006 Torino Games, or Miller — who won his only gold in super combined at Vancouver — could change that with a win in the GS on Wednesday.