As I-70 traffic, construction increase, flights into Eagle County Airport may rise 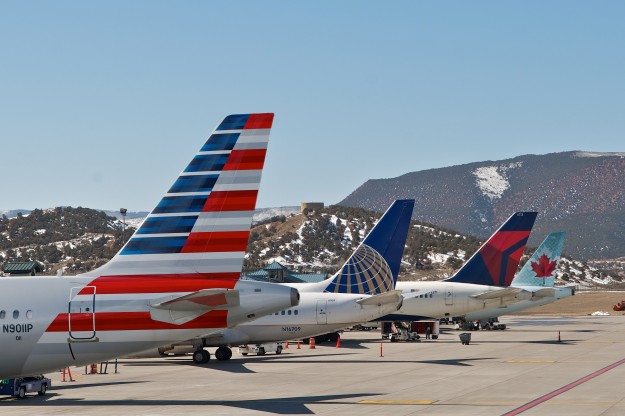 The Eagle County Regional Airport could see more demand as traffic worsens along I-70 (EGE photo).

The distance (120 miles) between Vail and Denver International Airport along Interstate 70 isn’t really getting any bigger. It just seems like it after a 2013-14 winter that frequently saw drive times in excess of four or five hours.

The biggest problem is cars and trucks going sideways on snow-choked high-mountain passes that soar to more than 10,000 feet (Vail Pass and the Eisenhower Tunnel), but things can be dicey all the way through the Front Range foothills.

Now comes word of the Colorado Department of Transportation’s plans to rebuild the last of the state’s “30 Worst Bridges” before something bad happens: the crumbling I-70 viaduct just north of downtown Denver.

Neighborhood groups are up in arms, but the state’s ski and tourism industries may also want to take serious notice. Drive times between mountain resorts and DIA – already bad during adverse winter weather and peak summer traffic – will be a whole lot worse during construction.

The only good news is that the Regional Transportation District’s 28-mile light-rail line from DIA to downtown Denver’s Union Station will be open by 2016, so domestic and international visitors can simply bypass the I-70 viaduct mess by rail. Too bad trains don’t continue on up to the state’s key mountain resorts in Summit and Eagle counties.

CDOT is hiring an I-70 corridor traffic coordinator to implement a number of strategies to reduce closures and delays along the key mountain stretch, but policy makers are watching closely. Colorado state lawmaker Diane Mitsch Bush is weighing legislation that contemplates limiting commercial truck traffic on I-70 during peak periods and could include traction checks and potential fines for private vehicles with inadequate snow tires or no chains.

All of this could help spur more flights and perhaps even international customs into the Eagle County Regional Airport, which is just 35 miles west of Vail on I-70 and can handle aircraft the size of Boeing 757s.

“What it really does is it puts a hell of a lot more pressure and value on us getting more flights, more frequency and more cities out of Eagle, because from the [Eagle County Regional Airport] to Vail is only 35 minutes, and that is extraordinarily competitive,” Daly said. “But it’s going to take some more flights to move the needle.”

“Right now I think about 35 percent of our [destination] skiers are coming through Vail-Eagle [County Airport], but more and more are going to be looking for it based on I-70,” Daly said.

Greg Phillips, aviation director at the Eagle County Airport, says the goal is to grow the number of passengers on existing flights and to possibly add more cities for next ski season. The Eagle airport is also studying the financial feasibility of adding international customs for more direct flights from other countries such as Mexico. He acknowledges the growing importance of the Latin American market to Colorado’s ski industry.

“We are hugely interested in encouraging the success of Latin American markets and helping our travelers get here,” Phillips said. “Whether it’s through direct flights or continuing to support our existing ports of entry and direct flights through Houston, Miami, Los Angeles or JFK, we’re certainly going to do everything we can to make that successful.”

More flights, of course, would mean more competition and lower airfares from key U.S., Latin American and European cities. On average, it costs about $230 more to fly in and out of Eagle versus DIA last year, Phillips says. But he’s increasingly seeing people willing to pay that premium to avoid I-70.

“Anecdotally, I hear from people who say I would much rather fly into Eagle and I’m willing to pay more to be able to avoid the time, the hassle, the drive, the parking, the potential impacts on the road from the drive itself to be able to fly directly in here and just take a quick shuttle up-valley,” Phillips said.

Phillips says the Eagle airport saw a pre-recession peak of 232,000 enplanements in 2007, which dipped to about 167,000 last year. But he feels that number has bottomed out and demand will continue to increase, allowing for more direct flights to more destinations in the future.

Stay Aspen-Snowmass President Bill Tomcich recently told the Aspen Times that the number of commercial airline seats into Aspen will be higher than Eagle County this coming ski season, as the number of seats into Eagle has declined steadily over the past eight years.