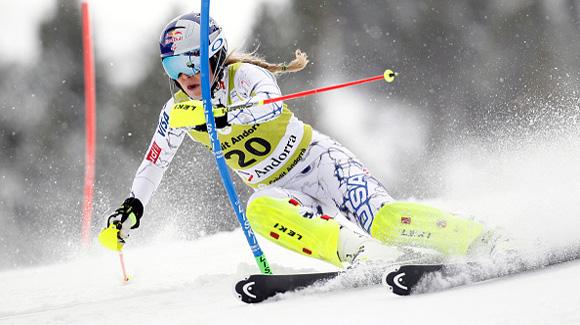 Lindsey Vonn rebounded from a injured knee to finish 13th in a combined event on Sunday (Getty Images/Agence Zoom-Alexis Boichard).

Vail’s Lindsey Vonn rebounded from a hairline fracture in her left knee that she sustained in a crash Saturday to finish 13th in a combined event on Sunday in Soldeu-El Tartar, Andorra, building her overall World Cup lead over Switzerland’s Lara Gut, who failed to finish the race.

Eagle-Vail’s Mikaela Shiffrin continued her remarkable comeback from a knee injury in December, finishing eighth in the first combined event of her World Cup career. The dominant slalom skier was 40th after the morning super-G, in which Vonn posted the fastest time, but fourth in the afternoon slalom for an overall eighth-place finish.

Vonn was scheduled to have another MRI on Sunday and will continue to drain the knee, which is swelling up with blood and fluid.

“Yesterday, I thought I wouldn’t be able to ski today,” Vonn told the Associated Press on Sunday. “But there was a small chance and I believed in it. With this mindset, a lot is possible. I am a fighter. Many think it’s just drama, but that’s nonsense. I have pain, but I can fight. I always give everything.”

Vonn wore braces on both knees and led the competition after the super-G but only managed 23rd in the slalom, which is not a strength for the speed specialist.

Gut straddled a gate in the slalom and didn’t finish, allowing four-time overall champion Vonn to extend her lead to a slim 28 points.