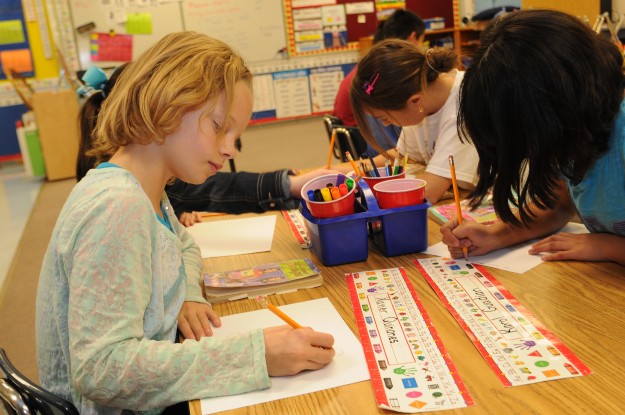 The PwrHrs after-school program is one of the most successful elements of the Youth Foundation, which was recently re-branded as YouthPower365 (Rex Keep photo).

One of the Vail Valley’s most effective education nonprofits recently announced a new name and brand identity. The Youth Foundation, which has served youth of our community since 1997, is now known as YouthPower365 and strives to serve ‘Every Child Every Day’.

“The new name is a respectful nod to our 19-year legacy and a step forward toward a bright future for the kids we serve,” said Melisa Rewold-Thuon of YouthPower365. “It allows us to more accurately depict who we are today, and where we desire to go tomorrow.”

Rewold-Thuon said a name change was needed for several reasons. The term “foundation” generally implies that an organization is a grant-giving body, which the Youth Foundation was not. Also, hundreds of other “Youth Foundations” exist nationwide, and a recent community survey revealed the organization would benefit from a more inclusive, descriptive term that exemplifies the goal of serving the educational needs of all youth in the valley, year-round.

“The tagline ‘Every Child Every Day’, encapsulates our vision to serve every child every day in the Vail Valley,” Rewold-Thuon said. “Our direct programming impacts every child, in every classroom, by helping raise the academic performance of students. In coming years, under the banner of our new brand identity, we seek to empower an even larger number of children, and multiply the effects of creating a positive culture of education throughout our community.”

YouthPower365 spent many months considering the options for the organization’s new title, and decided on YouthPower365 because of its significance for the current programs and future aspirations of their work.

YouthPower365 was founded in 1997 and merged with the Vail Valley Foundation on January 1, 2012. YouthPower365 elevates education, arts and athletics for more than 4,000 youth in the valley. Through 16 signature programs, they provide a complete direct services cradle to career pathway for their participants. YouthPower365 is unique because of an extremely strong partnership with Eagle County Schools. This relationship and their ability to extend the learning beyond the school day and school year for the success of our youth in school and in life does not exist in other communities.

The group’s alignment with the Vail Valley Foundation also lends efficiency to the group, as it allows YouthPower365 to focus less on administrative work and more on contact hours in the classroom. The result is that YouthFoundation365 provided 449,577 contact hours for local students in the 2014-15 school year, resulting in student growth.