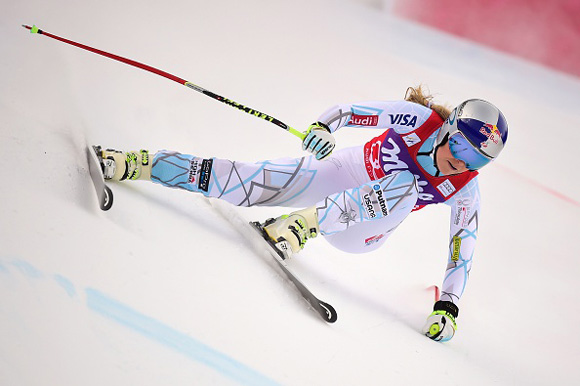 Switzerland’s Lara Gut, who won Friday’s downhill to briefly grab the overall lead from Vonn, finished 11th and once again  surrendered the overall World Cup lead to Vonn by 43 points (1,140 to 1,097) with just one downhill left on the schedule. The season downhill crystal globe was the eighth of Vonn’s storied career and 20th discipline title overall, surpassing Swedish great Ingemar Stenmark’s previous record of 19.

“Of all the records this year that I’m breaking, it’s still really hard to process what I’m doing,” Vonn said. “I won’t fully grasp the magnitude of everything until I’m done with my career. And I think it’s good that I don’t focus on it now because it’s something to distract my mind.”

Next up in La Thuile is Sunday’s women’s super-G, a discipline Vonn also leads over Gut, 360 points to 261.

“I still have to stay focused on the race every day and I can’t think about the records, or the future, or the points,” Vonn said. “But I’m still really proud that I’m able to accomplish that, especially after all my injuries, to be able to consistently wins globes … I’m proud of myself. Hopefully I have more globes to come in the future.”

Vonn is looking to expand her American record with a fifth overall World Cup title, but it looks like it will come down to the wire with Gut. After this weekend there are just four events left before the World Cup Finals in St. Moritz, Switzerland, March 14-20.