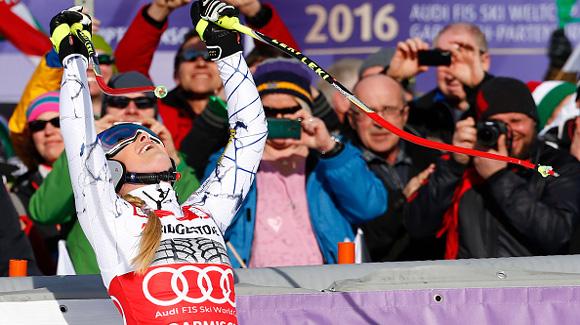 Vonn won with a time of 1 minute, 40.80 seconds, which was a staggering 1.51 seconds ahead of Switzerland’s Fabienne Suter in second. Germany’s Viktoria Rebensburg finished third.

“It was a great day!” Vonn said. “Every day is a new chance to break my own record. Every win for me is more special than the last. And my dad is here, so it’s really special.”

Vonn, already the most decorated woman ski racer in World Cup history, is now just 10 wins away from tying Sweden’s Ingemar Stenmark for the most wins ever at 86.

The former Ski and Snowboard Club Vail athlete built her lead in the chase for her American record fifth overall title, jumping to 1,000 points on the season, which is 127 ahead of second-place Lara Gut of Switzerland. Gut finished 14th on Saturday.

Vonn had the top time in Thursday’s training run, but said the course skied much different on Saturday.

“It was definitely a lot different today than it was in the training run, pretty much a totally different course,” Vonn said. “It was definitely bumpy … and very flat light in some sections. I was able to execute it well in the right places, and carry my speed through the whole course.”

The track was also in tough shape after new snow and warm conditions earlier in the week.

“I was watching all the racers from the start, and I could see that there where some problems,” Vonn said. “There were some bumps, and the problem is that the bumps were right in the compressions, and also where there were shadows, so you couldn’t really see anything.”

“It was a little bit rough out there,” Ross said. “I’m happy that I was able to ski strong, and ski smart. It was definitely a lot faster than (Thursday’s) training run, completely different snow. It was kind of like a super-G day, where you really didn’t know what was going to happen; the line changed in places and it was really bumpy.”

Up next, the women race super-G on Super Bowl Sunday in Garmisch.

In South Korea, the men got their first crack at the new 2018 Winter Olympic downhill course, and Utah’s Steve Nyman, who has reached the podium (top 3) three times at Beaver Creek, took home third on the 2018 PyeongChang course. Here’s the press release from the U.S. Ski Team:

On a beautiful sunny day in South Korea, the men got a chance to race the manicured PyeongChang downhill course. While there wasn’t much natural snow, the manmade surface held up for the 54 racers. Nyman stomped a fast run on the short track that heralded his gliding specialty, but Attacking Viking Kjetil Jansrud of Norway snuck ahead of him to take first with Dominik Paris of Italy on Jansrud’s heels in second.

Next up, the men race super G down the Jeongseon track. The race airs live on NBCSN and streams live on NBC Sports Live Extra at 10 p.m. EST on Saturday.

Steven Nyman
The snow was very responsive. I like the air. It was very similar to yesterday. They have been clearing the piste and you can do anything you want on the snow. It’s very similar to Beaver Creek, Lake Louise – dry, grippy. It’s a joy to ski.