A bill aimed at clarifying the state’s vehicle tire-traction laws along the Interstate 70 corridor passed out of the House this week and now heads to the Senate, where it was killed last year. 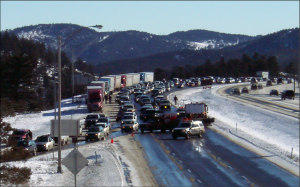 Interstate 70 into the mountains is frequently a traffic nightmare on weekends during the winter (I-70 Coalition photo).

Floated by Rep. Diane Mitsch Bush, a Democrat who represents Eagle County, the bill has become part of a contentious partisan debate over highway funding and the best methods for managing the congested I-70 corridor into the state’s mountain resort areas.

After navigating through a snowstorm on their way to the Capitol this morning [Tuesday, Feb. 2], members of the House gave final approval to Rep. Diane Mitsch Bush’s bill to reduce road closures and delays on the mountain corridor of Interstate 70.

The vote on HB16-1039 was 46-18. The bill, also sponsored by Rep. Bob Rankin, R-Carbondale, states that motorists must have adequate tires or chains or alternate traction devices on their vehicles from Oct. 1-May 15 between Dotsero and Morrison on I-70.

Every year, the I-70 mountain corridor shuts down repeatedly because drivers with inadequate equipment spin out or simply lose traction, blocking snow- or ice-covered lanes. Blocked traffic is a public safety issue that impedes ambulances and other emergency vehicles, endangers responding police officers and imperils other drivers. The state suffers an estimated $800,000 economic loss for every hour that I-70 is closed. Stuck-in-traffic visitors are more likely to head to some other state for their next ski vacation, and adequately equipped Colorado drivers who are commuting to their jobs lose wages when they are late to work.

“I-70 is the economic lifeline of the Colorado high country,” said Rep. Mitsch Bush, D-Steamboat Springs. “This bill will help educate drivers about existing traction requirements and reduce the frustration, hazard and economic loss that happens every time I-70 closes.”

The bill now goes to the Senate, where it was defeated last year.