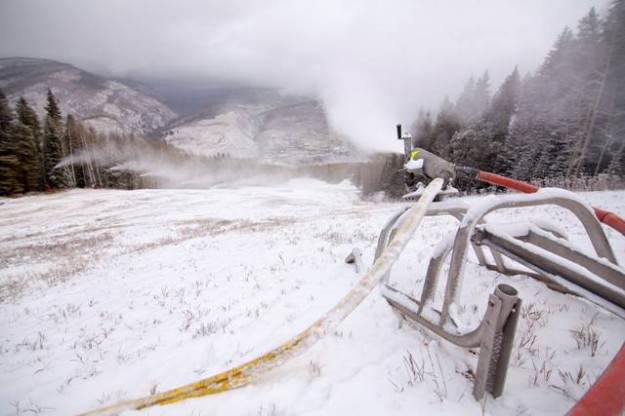 Snowmaking and fresh snow at Vail on Monday.

Up to four more Colorado ski areas will open on Friday, joining Arapahoe Basin and Loveland, after a winter storm deposited about a half a foot of new snow in Colorado’s high country,.

Copper and Breck both confirm on their respective websites that their sticking to Nov. 7. Wolf Creek’s website doesn’t confirm its original opening date, and a resort officials on Tuesday said upper management is still undecided. Keystone announced its new opening day Tuesday morning.

“Following a week of productive snowmaking and five inches of natural snowfall, Keystone Resort announced today its Opening Day is set for Friday, Nov. 7,” Keystone officials said in a press release Tuesday. “The 2014-15 season will get under way with first chair at 9 a.m. Friday, officially kicking off the resort’s 44th winter season.”

“With the start of the new month at Vail, snowmaking is now taking place on the main mountain, in addition to Golden Peak, in preparation for the resort’s opening in less than one month,” Vail officials said Monday.

Beaver Creek, set to open Wednesday, Nov. 26, showed at least five inches of new snow at its snow stake on Monday – good news for crews trying to lay down a base for the Birds of Prey men’s World Cup Dec. 5-7 and the World Alpine Ski Championships Feb. 2-15.

Aspen has a little more urgency as it hosts a women’s World Cup in just over three weeks. Crews there started snowmaking Monday after up to 9 inches of new snow fell on Aspen Mountain and Snowmass. Aspen and Snowmass both open Thanksgiving Day, Thursday, Nov. 27, and the Aspen Winternational is scheduled for Saturday and Sunday, Nov. 29-30.

Copper Mountain is hosting U.S. Ski Team training and the First Tracks team naming event Saturday, Nov. 8, but so far has not been able to open its speed center for downhill and super-G training. However, athletes have been able to do slalom and GS training and colder temps have led to more snowmaking all over the mountain.

According to Opensnow.com, the prevailing weather pattern calls for mostly dry conditions for the next 10 days or so, with storms missing Colorado to the north and a slight chance for flurries clipping the northern part of the state. Things may change toward the middle of the month.