Saturday, May 19, is Colorado Public Lands Day — an annual celebration made possible by Vail state Sen. Kerry Donovan — and a sentiment deemed all the more important by conservation groups during the pro-industry days of the Trump administration. 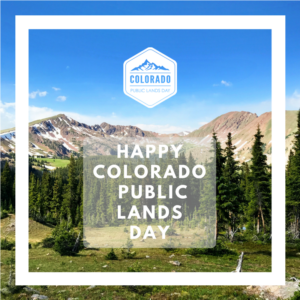 “While serving in the legislature, I have fought to keep public lands public, protect water quality, and advance action on climate change,” Donovan wrote in an email blast to constituents Saturday. “Our public lands are one of the best aspects of our great state and that’s why I laid the groundwork and sponsored the legislation that established Colorado Public Lands Day and we were the first in the nation to celebrate our public lands.”

Donovan will be celebrating Colorado Public Lands Day with a cleanup session at the Gore trailhead in Vail from 9 a.m. to noon on Saturday. RSVP via her Facebook page. Eagle state Rep. Dylan Roberts will be celebrating the day participating in a hike into the Spraddle Creek area of Vail that’s proposed as a wilderness area addition in the Continental Divide Wilderness, Recreation and Camp Hale Legacy Act. Click here for more information.

And on the topic of that proposed wilderness bill, here’s a re-post of a story RealVail.com wrote for the Vail Daily that published on May 7:

A coalition of nearly 100 Colorado businesses – most of them from Eagle and Summit counties – used the occasion of National Small Business Week to fire off a letter to Republican U.S. Sen. Cory Gardner on Wednesday seeking his support for a proposed local wilderness bill.

The offspring of the far more controversial Hidden Gems proposal, the current incarnation – known as the Continental Divide Recreation, Wilderness, and Camp Hale Legacy Act – is sponsored in the House by U.S. Rep. Jared Polis and in the Senate by Sen. Michael Bennet.

Modeled on legislation first introduced by Polis in 2014 after years of stakeholder meetings, the revamped bicameral bill would designate 98,621 acres of federal lands in Eagle and Summit counties as protected wilderness areas and create the first-ever National Historical Landscape at Camp Hale. Longstanding off-road vehicle and mountain biking uses are maintained.

“Instinctively, the greatest asset Colorado as a state has is its backcountry and its wilderness,” said Harry Frampton, founder and chairman of East West Partners. “It’s our special sauce. It’s why we prosper as a state and as a community, and I just think in my gut it’s terribly important that we keep those assets pretty pristine … not only for our own short-term business interests but for the long-term legacy of the state.”

Polis and Bennet, both Democrats, first rolled out the latest version of the bill in January just ahead of the Outdoor Retailer + Snow Show in Denver – an event that moved to Colorado after many years in Utah because of the strong GOP push in that state to scale back protections for public lands and allow for more mining and oil and gas drilling.

Wilderness is one of the most restrictive designations for federally-owned public lands, banning development and most forms of mechanized travel.

The Continental Divide bill is unique in that it doesn’t close any current motorized access points, and it also accommodates water, electrical, transportation and even mining infrastructure. The bill is backed by Eagle County, the town of Vail, Vail Resorts and many other groups.

Bennet was poised to introduce a Senate version of the bill in 2016 before Trump was nominated and a Republican Party platform calling for the conveyance of federally owned public lands to state control was passed. Since then Republican lawmakers in Utah got Trump to propose scaling back Bears Ears and Grand-Staircase Escalante national monuments.

A longtime developer of ski resort base villages, Frampton acknowledges the Trump administration wants to see more public lands opened up to extractive uses such as mining, drilling and logging and is not focused on wilderness protection and outdoor recreation.

“There’s no question that’s the case, and I strongly disagree with that, but I would hope that Mr. Gardner would come out — we are a state that fundamentally knows that’s one of our great natural resources – and be supportive of it,” Frampton said. “If you can’t get it through Congress, that’s OK, at least we’re trying, and hopefully the day will come when there’s a change in focus there.”

“Public lands are some of our most cherished national treasures, and as a fifth generation Coloradan I understand the importance of preserving iconic landscapes in my state and across the nation,” Gardner’s website reads. “Public lands in Colorado help create an outdoor recreation economy that contributes hundreds of millions of dollars in economic activity to the state and local communities and supports jobs.”

Gardner also pushed hard last year to get assurances from Interior Secretary Ryan Zinke that national monuments in Colorado would not be targeted for reductions like the cuts proposed for Bears Ears and Grand-Staircase in Utah.

Donny Shefchik, senior guide/field director for Paragon Guides in Vail, says the company likely wouldn’t even be in business if people did not have an “innate sense, desire or feeling that somehow being out in a wild place is important to them.”

But the state’s growing population makes it all the more important, he added, for wilderness protections that safeguard wild places, water sources and wildlife.

“More people – whether that means in the Vail Valley, Eagle County or Denver – are going to spread out into the public lands,” Shefchik said. “So, this awareness and mindfulness of protecting these wild places — as much from development as more people or mechanized things — is important so that we’re a little bit proactive instead of reactive to the increased population.”

To read to the letter to Gardner’s office, click here (pdf).