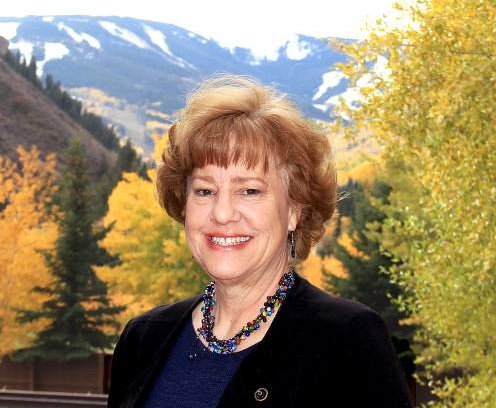 Jan Hiland, the Vail Valley Foundation’s 2017 “Volunteer of the Year”, is a somewhat reluctant recipient who has a very simple philosophy when it comes to volunteerism.

“I really feel there are other people who have been volunteering as much if not more than me for many years in the Vail Valley,” said Hiland. “Of course, I am extremely surprised and honored, but I kind of look at life as holes that need to be filled. You jump in and you fill the holes.”

Filling holes can include almost anything, and in a quarter century of Vail Valley volunteering, Hiland has done virtually everything – from chairing Wild West Days early on and raising tens of thousands of dollars for local elementary schools to helping get Gypsum Middle School built to running events for the Vail Valley Charitable Fund to helping found Eagle County for Human Rights to volunteering for the Red Ribbon Project and Vail Resorts’ Epic Promise program.

But filling holes can also be much more than a mere metaphor. For Hiland it can literally mean patching up the costumes of world-class dancers as the Wardrobe Mistress for the Vail Dance Festival and calming the nerves of never-ever dancers in the same role with the Vail Valley Foundation’s incredibly successful Star Dancing Gala fundraiser every year.

“We kind of fulfill that mom support role backstage,” Hiland said. “We consider ourselves a MASH unit — Mobile Alpine Sewing Hospital — because I’ll pick up shop at the amphitheater and we’ll go to the Vilar, we’ll go to the Avon park, and I’ve been doing it long enough that I now consider the crew and the dancers my friends. It’s like coming back to camp or college.”

It all started with a daughter who danced and a friend who ran a dance school and volunteering for the remade Dance Festival at the Ford Amphitheater after the Bolshoi left and the festival was being successfully reinvented. Hiland volunteered in order to get tickets for friends and family but then started hanging out back stage with dancers and helping out on costumes with a couple of shoe boxes full of needles, thread and a steamer.

Many years later, and many generations of volunteers and dancers later, Hiland is the officially titled and fully and professionally equipped Wardrobe Mistress who also doles out oxygen and water for professional dancers impacted by Vail’s altitude and dry atmosphere. But she’s not interested in credit for that role because it’s been more about brining young dancers together.

“I just feel dance is so important, because it helps you in all other facets of your life,” Hiland said. “To me, it’s important if the dancer goes on stage and comes off the stage in the same outfit that they’re supposed to with nothing hanging out, then my job is good, but the great, great joy is with these young dancers and introducing them to the world of dance.”

Hiland, whose day job is as a senior administrator for Beaver Creek Mountain Operations (a role her daughter says earned her the title of “Queen Beav’”), is now an integral part of the Vail Valley Foundation Dance Festival team after those early volunteer days starting in 2001.

“She is without a doubt the No. 1 dance mom in the biz!” said Martha Brassel, director of development for the Vail Dance Festival. “The dancers love her, she manages all the nips and tucks backstage as well as calming the nerves and boosting their confidence before they hit the dance floor. We could not do what we do at either the Dance Festival or the Vail Valley Foundation’s key annual fundraiser – the Star Dancing Gala – without Jan Hiland. We love her!”

Hiland has helped avoid some potentially disastrous wardrobe malfunctions over the years. Maybe not quite on the Janet Jackson-Justin Timberlake Super Bowl halftime scale, but close.

A group of South American dancers who were working their way through the history of the tango but not used to so many costume changes once saw their side-slit dresses split all the way up to their bellybuttons. Some quick thinking, a trip to Walmart and a sew job that attached underwear to dress, and the day was saved.

“It could have been a whole different kind of show,” Hiland joked. “During the Dance Festival I swear I’m at WalMart every 10 minutes. But my belief is doing whatever we can do to make the dancers feel the most comfortable, so that they can just shine on stage.”

Asked what she’s most proud of as a volunteer, Hiland launches into stories from 30 years ago on a topic that made a lot of folks in notoriously conservative Colorado Springs decidedly uncomfortable. Hiland grew up in the state’s hotbed of religious family values, but leaped full force into volunteering on behalf of the city’s LGBT community when her brother Eric came out.

When Colorado passed Amendment 2 (No Protected Status for Sexual Orientation) in 1992, Hiland volunteered on a statewide basis to promote gay rights and combat discrimination. Her parents, former part owners of Pikes Peak ski area, changed political party affiliation and her father was the first emcee of Colorado Springs’ inaugural gay pride parade. Though they lost a lot of Broadmoor friends, they also made a big difference promoting tolerance, and Hiland discovered some likeminded folks closer to home in Eagle County.

“[Amendment 2] was absolutely devastating for my family, and lo and behold there were some folks in the valley – [Youth Foundation founder] Susie Davis among them – who were as upset as I was, and they got together for a candlelight vigil, I got involved with them, and Eagle County for Human Rights was born,” Hiland recalled, reminiscing about her daughter and nieces rollerblading under the Eagle County banner in the Colorado Springs parade.

But no matter the cause, it’s all about filling the holes in life for Hiland … and doing it with style.

“The philosophy that we have is whatever you do, make it festive,” Hiland said. “Whatever needs to be done, and if you have the time, do it. I never had a lot of money to donate, but I can donate me and my time. You need the money people, but you also need some of the doers, and I like being involved. I have FOMO, which is Fear of Missing Out.”

Past Vail Valley Foundation “Volunteer of the Yea” recipients: