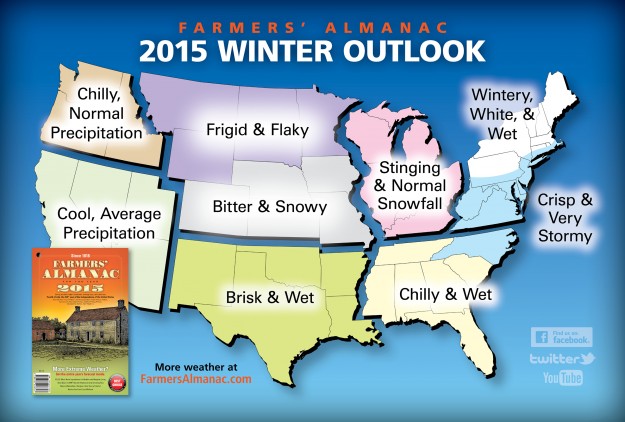 The Farmers’ Almanac is predicting another record-breaking winter season for much of the United States, although where the heaviest snow will fall remains a matter for debate – one influenced to some degree by an El Niño pattern in the Pacific.

“While we don’t think the winter will be as extreme as last year,” Farmers’ Almanac Editor Peter Geiger said in a press release Tuesday (see full release below). “We do believe that it’s going to be another one for the record books.”

The Almanac is predicting near-normal or below-normal precipitation for the Southwest states, with truly “shivery and shovelry” weather for the Northern Plains, Great Lakes and East Coast. That’s not the greatest news for snow riders in the West, but El Niño patterns (warmer water in the Pacific) can be very fickle.

Generally, though, an El Niño winter means more snow in the southern U.S. and less in north. Colorado is often right on the dividing line.

The Epic Pass, which could still include Park City, Utah, this season depending on legal proceedings this week, was still selling for $729 for adults as of Tuesday morning, Sept. 2.

Now here’s the full press release from Farmers’ Almanac, not to be confused with FarmersOnly.com:

Lewiston, ME: Winter is right around the corner, and the Farmers’ Almanac, which accurately forewarned of the bitterly cold and snow-filled winter last year, just released its 2015 edition and official winter weather outlook.

It’s not for the winter-weary, but it is good news for outdoor winter sports enthusiasts.

According to the 198th edition of the Farmers’ Almanac, “The winter of 2014–2015 will see below-normal temperatures for about three-quarters of the nation, with the most frigid areas occurring in and around the Northern Plains into the Great Lakes.”  The new edition, which hit store shelves officially on August 25, 2014, states that “no region will see prolonged spells of above-normal temperatures.”

The Almanac, which has been predicting the weather for nearly 200 years, suggests that there will be a very cold outbreak during the final week of January into the beginning of February, going as far as to state that temperatures could drop to 40 below over the Northern Plains. Yes, “more shivery and shovelry” conditions are on tap for the winter ahead.  So those looking forward to lots of the white stuff  — skiers, snowboarders and snowmobilers – can rejoice.

“While we don’t think the winter will be as extreme as last year,” reveals editor Peter Geiger, “we do believe that it’s going to be another one for the record books.”

In areas where snowfall averages may be lower this winter, the temperatures will be cold enough to support plenty of snow making, so resort towns in regions where precipitation won’t be too extreme can still plan on attracting winter sports fans.

The Farmers’ Almanac outlook includes a very stormy one for the eastern third of the country, with copious amounts of snow (and yes, rain), especially during the first ten days of January and the first week in February near the Atlantic Coast. Near-normal precipitation is expected for the Pacific Northwest, the Southwest states, and Northern Plains. Below-normal precipitation values are forecast for the Southwest states as well as the Upper Midwest and the Great Lakes. The Central and Southern Plains are in what the Almanac is describing the “above average precipitation area.”

The 2015 Farmers’ Almanac contains 16 months of weather forecasts (September 2014 through December 2015) and provides a broad overview and map for the winter and summer seasons ahead, as well as month-by-month zoned forecasts for the contiguous U.S. Millions of readers consult the Farmers’ Almanac for seasonal outlooks as well as use its long-range forecasts to pick dates for vacations and weddings.

Aside from the winter weather forecast, the 2015 Farmers’ Almanac contains unique and refreshing articles on ways to live a more healthy, organic, and happier lifestyle. The 198th edition offers even more natural remedies, including a natural way to boost your immunity system and help flu symptoms dissipate quicker, as well as uses for catnip, natural bug repellent ideas, and helpful ways to encourage good luck in new homes. Always thrifty, this year’s edition offers stories on how to eat organically without blowing your budget, cost-friendly ways to makeover your garden, how and where you can find reusable building materials for your DIY projects, and what common ingredients you should stock in your medicine cabinet for more natural and less-expensive healthcare.

For more information on what’s inside or on the Farmers’ Almanac’s first-ever recipe contest, visit the web site at www.FarmersAlmanac.com.

“If the winter weather outlook doesn’t excite you,” shares managing editor Sandi Duncan, “the new edition of the Farmers’ Almanac is sure to help make 2015 your year by providing you with the important tools you need to grow your life.”

For the first time in its 198-year history, the Farmers’ Almanac did put a small disclaimer near its winter outlook. At the time of printing for the 2015 edition, the National Oceanic Atmospheric and Administration issued an official El Nino warning. As Caleb Weatherbee, Farmers’ Almanac weather prognosticator notes, “an El Nino could result in more rain this winter for drought-stricken California and southern states, and a milder winter for the nation’s frigid northern tier.”  This could affect the Almanac’s long-range outlook, but both its editors and Weatherbee stand by their winter forecast of more “shivery and shovelry,” and suggest readers wax their skis and snowboards, and stock up on firewood, sweaters, and hot cocoa for another long, cold winter.

The 2015 Farmers’ Almanac is available now in bookstores, grocery stores and online at www.FarmersAlmanac.com

One Response to Farmers’ Almanac predicts ‘record-breaking winter,’ but El Niño a wild card for skiers