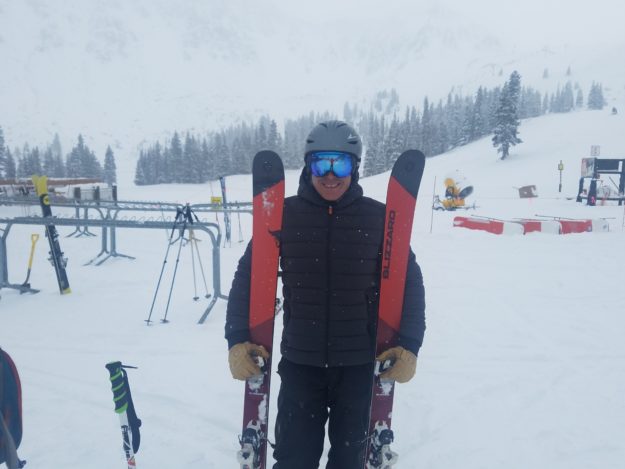 It was full-on winter at Arapahoe Basin on Election Day. Shout out to my sponsor, Blizzard (JK). Seriously, though, love my new Bonafides.

Some Colorado ski areas have been hit by more than four feet of snow so far this season. Too bad most of them still aren’t open. But that’s about to change on Wednesday, Nov. 7, with two more Epic Pass resorts cranking up their lifts for the 2018-19 ski season – Breckenridge and Keystone.

The two resorts just over Vail Pass in Summit County are both opening a couple of days early because of all the fresh snow – joining fellow Epic Pass resort Arapahoe Basin and nearby Loveland Ski Area. Eldora, closer to the Front Range, is also opening Wednesday, and Wolf Creek, a southern Colorado ski area that has been open on weekends since early October, re-opens on Friday and stays open for the rest of the season.

Vail opens for the season on Friday, Nov. 16, and Beaver Creek gets things going on Wednesday, Nov. 21. And now comes news that nearby Ski Cooper, high on Tennessee Pass on the way to Leadville, is getting in on the action by opening early on Friday, Nov. 23.

I can personally attest to the quality of the snow at A-Basin, where I took some Election Day turns on Tuesday, Nov. 6 (don’t worry, I already voted). The Basin was reporting 6 new on top of 10 the day before, for a two-day total of 16 inches, but there are still just three runs open and only one of nine chairlifts. That seems likely to change in the coming days.

Still, what was open was great, and it felt good to get in my first turns of the young season. Forecasters are calling for a couple of more minor storms on Thursday and Sunday, with cold temperatures ideal for snowmaking.

Last call for buying an Epic Pass is Sunday, Nov. 18, and here’s a presser from Vail Resorts with all the details:

Epic Pass Now Includes Access to Seven World-Class Colorado Resorts for the 2018-19 Season and Nov. 18 is the Last Chance Buy

BROOMFIELD, Colo. — Nov. 6, 2018 — The Colorado ski and snowboard season is just beginning, with both Keystone and Breckenridge opening early, on Wednesday, Nov. 7, after receiving more than four feet of snow in the last week and the last chance to purchase a season pass to experience Colorado’s premier resorts is Sunday, Nov. 18. Whether visiting a tried and true favorite or hitting the slopes at a new destination like Crested Butte or Telluride, Colorado skiers and riders can ensure a season of great skiing and riding at world-class resorts just a short drive from home.

The Epic Local Pass offers the greatest value for unlimited, unrestricted skiing and riding at four resorts in Colorado plus a total of 10 days at Vail, Beaver Creek, Whistler Blackcomb and more. At just $709, the Epic Local Pass pays for itself in just over four days of skiing and offers unlimited, unrestricted skiing or riding at Breckenridge, Keystone, Crested Butte, and Arapahoe Basin with limited restrictions at Park City Mountain in Utah and Heavenly, Northstar and Kirkwood in the Lake Tahoe region of California and Nevada and a total of five consecutive days of skiing and riding at Hakuba Valley’s nine ski resorts.

The last chance to purchase the entire lineup of Epic Pass and Crested Butte Season Pass products is Sunday, Nov. 18. For more information on season options and to purchase, visit www.epicpass.com.

The deadline to purchase a 2018-19 season pass is Sunday, Nov. 18. For additional information on season pass options and to purchase, visit www.epicpass.com.