The dedication ceremony for the Pioneer Pew at Eagle River Presbyterian Church in Eagle-Vail.

Dr. Kent Petrie had what could be described as epiphany recently when asked to serve once more as an elder in the Eagle River Presbyterian Church, where he has been a member since 1985.

The call to serve got him thinking once again about the long and illustrious history of the church, which dates back to its days in Red Cliff and Minturn during Eagle County’s rough-and-tumble years as a high-country hub of mining and railroading in the late 1800s.

ERPC was the first church to be chartered in Eagle County, serving as a spiritual beacon to pioneering people carving out a tough life in the remote and inaccessible Rocky Mountains. The church later branched out to Minturn, where for years its congregation worshiped in the historical building that now houses the Holy Toledo consignment store.

But when ERPC outgrew its collective venues in Red Cliff, Minturn and the Vail and Beaver Creek chapels and sold the Minturn Church in 2002, Dr. Petrie – inexplicably as far as his wife Martha was concerned – swooped in to rescue three of the church’s old pews.

“When we sold that building in 2002, I became the proud owner of three of these small pews,” Dr. Petrie said during a recent dedication service at ERPC’s new location along the banks of the Eagle River in Eagle-Vail. “Martha wondered what I was thinking as they were in pretty bad shape, but I guess I was just saving them for this day. 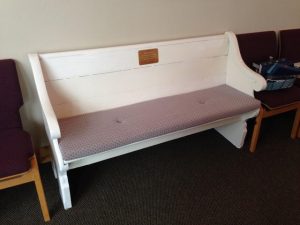 “We are about to enter our 15th year in this building [in Eagle-Vail], and many of you aren’t familiar with the bold journey that brought us here. To commemorate that journey, I asked Bud Passhier to restore the old pew … thank you, Bud, for your labor of love. It will be placed in the back of the church under the old cross that hung in Minturn, along with a history of our journey.”

After installation of the new elders and deacons, Dr. Petrie walked Burnett, 90, up to the front of the church, where she was clearly chagrined by the attention. Dr. Petrie, Burnett’s niece, Terri Pierson, and Burnett sat on the Pioneer Pew, surrounded by other church pioneers and former elders and deacons for a prayer from current Pastor Rob Wilson.

Pierson shared that the hymnal racks and communion cup holders were constructed as a project by the Minturn Boy Scout troop in the 1960s to earn their woodworking merit badge. Burnett and Pierson were both baptized in the Minturn Church on the same day, 68 years ago, when Burnett was 22 and Pierson was 4.

The Minturn Church’s wooden cross, which now hangs on the back wall in the “new” Eagle-Vail church, was constructed by George Salazar, who was a Minturn resident and early church member.

Sandy Agneberg remembered ordering the cushions for the pews and picking out the fabric in honor of her late first husband, Lynn Robertson, who, when dying from terminal cancer, felt the hard, wooden pews had become intolerable to sit on.

So, Eagle County’s oldest chartered church, which has since expanded and improved its Eagle-Vail location, connected its current and ever-growing congregation to its rich history dating back to the Vail Valley’s pioneering spirit that by far predates the area’s growth as a global resort.

And Dr. Petrie, after a decade and a half, cleared out some much-needed space in his garage.