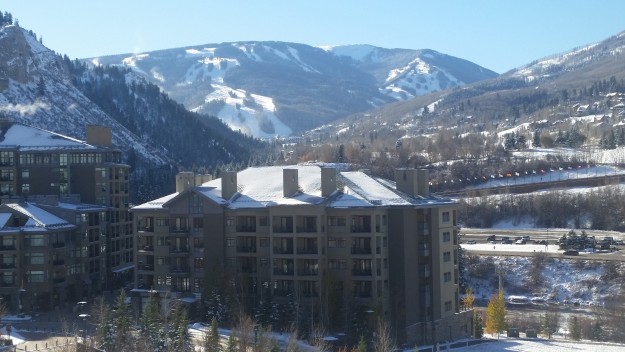 It looks a lot like mid-winter at Beaver Creek, with the Westin in the foreground. Opening day is still nearly two weeks out but conditions are reportedly stellar as of Thursday, Nov. 12. Vail’s Golden Peak opened for race training, and the resort opens to the public next week on Friday, Nov. 20. Beaver Creek opens on Nov. 25 and hosts World Cup racing Dec. 4-6 (David O. Williams photo).

It may not be wintry enough in Levi, Finland to host the annual World Cup slalom races there this weekend, but it’s more than snowy enough in Colorado, where Vail’s Golden Peak opened for training on Thursday and Aspen is opening early and hopes to pick up Levi’s women’s slalom and add it to their annual Winternational World Cup on Thanksgiving weekend.

That would be, in the words of the Donald, “huge,” because it would give Eagle-Vail’s Mikaela Shiffrin an extra shot at becoming the first American woman to win at Aspen since the great Tamara McKinney nabbed a GS title there in 1981. The only other Americans to ever win in Aspen are racing legends Bill Johnson (downhill in 1984) and Phil Mahre (GS in 1981).

Since then, Americans have barely cracked the podium. Shiffrin was a disappointing fifth in slalom there last season, and Vail’s Lindsey Vonn finished fourth in a downhill in Aspen in 2007. The last U.S. podium (top three) in Aspen was a third in GS by Squaw Valley’s Julia Mancuso in 2011, but she’s taking the rest of the season off after hip surgery this week in Vail.

It’s too bad Mancuso won’t be in Aspen, because she’s the greatest women’s alpine ski-racing Olympian ever, with four Olympic medals, including a gold in GS in Torino, Italy, in 2006. She’s also won five world championship medals.

But Shiffrin, at age 20, is making her own case. She’s coming off a second-place GS result in Soelden, Austria, last month, and overall has 14 World Cup victories to her credit already – to go along with an Olympic slalom gold and two world championship slalom golds.

And Vonn – the greatest women’s World Cup racer of all time with 67 wins — will hopefully be back in time for the Aspen races after skipping Soelden due to a broken ankle over the summer, followed by a dog bite when she tried to break up a fight over a Frisbee. Aspen doesn’t really suit her style of skiing, but you know she wants to make an appearance for her U.S. fans.

Vail and Aspen have a long ski-racing rivalry dating back to the beginning of the World Cup circuit in 1967, but American men have had far more success at Aspen than the women, including a second place in slalom by Bode Miller back in 2001.

Miller is skipping this World Cup ski racing season to focus on other business interests, including horse racing, but he’ll be in Beaver Creek Dec. 4-6 for the annual Birds of Prey men’s World Cup races – not to compete, but to provide commentary for NBC.

That will be interesting given his sometimes prickly relationship with the media and his often rambling and introspective press conferences, but the World Cup is far more interesting with Miller than without him.

He’s keeping his options open for future racing, not ruling out trying to add to his American record six Olympic medals by racing at the 2018 Winter Games in South Korea. Miller enjoyed four of his U.S. men’s record 33 World Cup victories at Beaver Creek, but his last memories at the Beav’ aren’t great after a devastating crash in super-G there at the 2015 World Championships.

One guy who will race at the Beav’ for sure is Park City’s Ted Ligety, who will be vying for a sixth-straight GS World Cup victory on the Birds of Prey course. Five of his 25 overall World Cup wins (20 percent) have come at Beaver Creek, where he also won a World Championship gold in GS earlier this year.

Beaver Creek will be in fantastic shape for the early December races, having received nearly 3 feet of natural snow already this season and plenty of cold air ideal for snowmaking on the challenging Birds of Prey course.

And there’s more good news for American ski-racing fans with the announcement on Wednesday by the International Ski Racing Federation (FIS) that Killington, Vt., will get Aspen’s World Cup slot next season so Aspen can host the World Cup Finals in March. Beaver Creek is also on the schedule again in December of 2016.

“Bringing Audi FIS World Cup ski racing back to the east has been an important organizational initiative to raise the profile of the sport in America,” said Tiger Shaw, President and CEO, U.S. Ski and Snowboard Association.

“Since we announced Killington in October, we’ve been gratified with the outpouring of support from our fans and the entire ski industry. The combination of an eastern World Cup at Killington, along with the global showcase of the World Cup Finals in Aspen, plus our traditional iconic week on Birds of Prey at Beaver Creek, will provide an amazing platform for alpine ski racing in America.”

OBERHOFEN, Switzerland (Nov. 10, 2015) – The International Ski Federation’s governing FIS Council this weekend confirmed the 2016-17 Audi FIS Ski World Cup calendar. The approval paves the way for Killington to be added as an opening women’s event in November, followed by the men’s Birds of Prey World Cup at Beaver Creek and the World Cup Finals in Aspen to finish the season.

The traditional U.S. swing in early season will kick off Thanksgiving weekend Nov. 26-27, 2016 at Vermont’s Killington resort with a women’s giant slalom and slalom. The weekend is traditionally held at Aspen, which will isntead play host to the Audi FIS Ski World Cup Finals March 15-19, 2017. Beaver Creek Resort will continue with its traditional speed and GS weekend Dec. 2-4, 2016.