Vail’s Lindsey Vonn is back in action this weekend on the World Cup circuit, seeking to tie the all-time career victory record for a female ski racer held by retired Austrian great Annemarie Moser-Proell.

Clearly fully recovered from two knee surgeries dating back to 2013, Vonn won twice last month and then spent some relaxing time at her home in Vail, free skiing with friends and training on the Raptor racecourse at Beaver Creek that will host the 2015 World Championships next month. 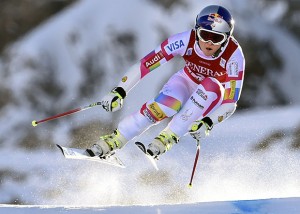 However, Vonn then came down with flu-like symptoms she’s been battling during training runs for this weekend’s speed events at Bad Kleinkirchheim, Austria. Vonn skied conservatively and wound up 39th – more than 5 seconds back – in Thursday’s training run.

Vonn has won nine times in Austria but never at Bad Kleinkirchheim, which is back on the schedule for the first time since 2012. Another training run is set for Friday, followed by a World Cup downhill Saturday and a super-G on Sunday.

Then the women’s circuit shifts to Flachau, Austria, on Tuesday, Jan. 13, for a night slalom – the final tech event before World Championships Feb. 2-15 and one last chance for Eagle-Vail’s Mikaela Shiffrin to add to her win total before coming home to defend her 2013 World Championships slalom gold on home snow at Beaver Creek.

Vonn is unlikely to compete in the night slalom but will have several more chances to tie and surpass Moser-Proell’s record of 62 career wins (Vonn is one back with 61).

Vonn is very aware of all the records, particularly the all-time women’s win mark. She even knows how many wins the best men piled up during their illustrious careers. Asked once if she could ever approach the all-time men’s mark of 86 compiled by Sweden’s Ingemar Stenmark between 1975 and 1989, Vonn thought it was possible.

“I think if I average nine or 10 wins a year, it’s possible, but that is really hard,” Vonn said. “I realize I’ve done it in the past for a few years, but it takes a lot out of you. It’s possible statistically, but like I said it’s not my goal right now.”

No other men ever surpassed 60 career wins, including Hermann Maier (54) and Alberto Tomba (50). Vonn and Moser-Proell are the only women who’ve ever cracked the 60-win plateau.

One goal for the 30-year-old Vonn is improving on her already stellar World Championships medal haul of three silvers in 2007 and 2011 and two golds in 2009. She crashed and blew out her knee at the last Worlds in 2013, costing her a shot at the 2014 Winter Olympics. She is especially motivated to win a world championship on home snow, where she claimed a regular-season World Cup win on Beaver Creek’s men’s Birds of Prey course in 2011.

“2015 has been my long-term goal for many years, and I’ve always said that after 2015 I’ll reevaluate and see where I am mentally and physically and if I’m still enjoying it,” Vonn said in a previous interview.

“If I am, then I’ll keep racing, but if not that could be a good time to retire, but I don’t foresee that happening. I foresee myself competing for a long time. I think this injury has only motivated me to continue racing longer, and I feel that there’s a lot more that I have to accomplish.”