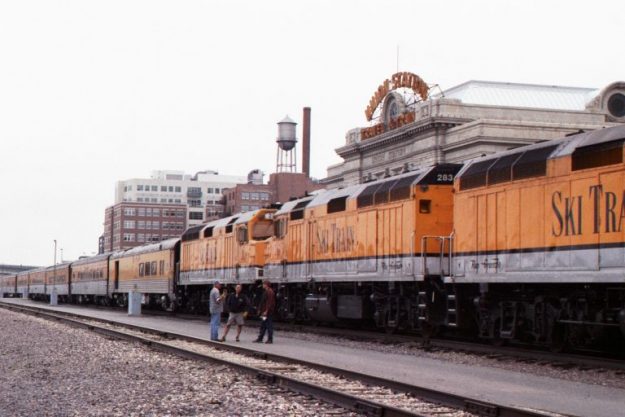 For years, I’ve wondered, as Vail Resorts snapped up small ski areas near major metro areas like Chicago, Detroit and Minneapolis to bolster its Epic Pass season ski pass, why it had yet to acquire an East Coast resort near the massive metro areas along the Atlantic seaboard.

Now the local Stowe, Vermont, newspaper and The Street are both reporting Vail Resorts executives have been kicking the tires on the venerable Stowe Mountain Resort, which is owned by a subsidiary of insurance giant and Wall Street bailout posterchild AIG.

Stowe is just a three-hour drive from Boston, but perhaps more intriguingly, it’s just a little over two hours from Montreal – Canada’s most second largest city and a natural pipeline for north-of-the-border snow riders who may also be interested in visiting Vail Resorts’ most recent acquisition of Whistler-Blackcomb in British Columbia.

I’ve written for years about the transportation issues that plague some of the nation’s most successful ski resorts, especially the most popular ski areas in the country along Colorado’s Interstate 70 corridor. I’ve also written about my love of European ski trains and the revival of the nation’s only true ski train to Winter Park from Denver’s Union Station.

But Winter Park is not a Vail Resorts ski area, so really none of the Broomfield-based company’s 12 resorts have a dedicated ski train. But Stowe, at least, has daily Amtrak service on the Vermonter connecting it to Washington, D.C., Baltimore, Philadelphia and New York City.

Now, it takes nearly 14 hours to get from D.C. to Stowe, so it would have to be seen as more of a destination ski train. Still, it’s another selling point.

Personally, I’d love to see the company make public transportation more of a priority in the Vail area, where dormant rail lines run east to the Front Range and west to Dotsero, where they connect with active rail lines that run west to Utah and then on to Lake Tahoe in California – where Vail Resorts owns lots of ski resorts.

With the Trump administration pushing infrastructure projects, passenger rail could be a viable upgrade for the nation’s transportation system, but instead Washington remains focused on I-70 expansion, which would be nice but is somewhat limited in how much it can ease congestion.

And President Donald Trump also has promised to revive the nation’s struggling coal industry despite the abundance of cheap natural gas and the crash in global markets as China moves away from coal.

Any uptick in the nation’s coal industry, besides arguably hurting the nation – and certainly its ski industry – on the global climate change front, also is bad for passenger rail service, since priority is given to coal trains over people in this country.

The reason the Tennessee Pass rail line between Dotsero and Pueblo is dormant now is because coal train traffic dropped off so dramatically for Union Pacific. The railroad giant was going to officially abandon the line but the federal government wanted to keep it in place in case coal-train traffic someday picked up again.

When I first moved to the Vail Valley in 1991, trains still rolled through Eagle County. Many, many homes and ski condos have been built along those railroad tracks since the early to mid-1990s when the rail line went dormant.

Imagine the ramifications of coal trains running through town once again, let alone the occasional passenger train. But also imagine jumping a train at Avon, at a station linked by gondola to Beaver Creek, and riding the rails with your skis in your ski bag to Park City, then on to Lake Tahoe.

It would be a global ski attraction of epic proportions.