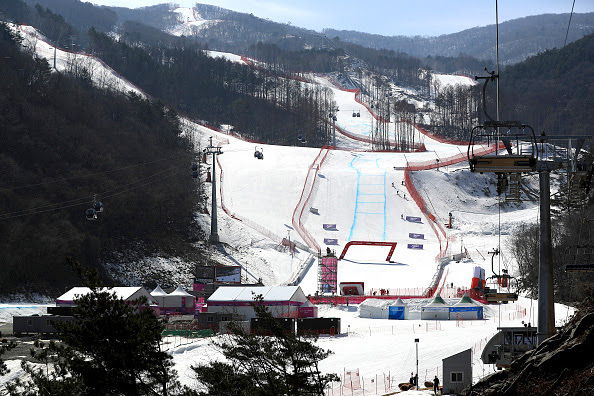 Can Vail’s Lindsey Vonn win her record-expanding 78th World Cup race Saturday on the Olympic downhill course at Jeongseon, South Korea, where she hopes to grab another gold a year from now during the 2018 Peongchang Winter Olympics?

After battling back from numerous injuries and ailments and missing the 2014 Sochi Winter Olympics, the 32-year-old Vonn certainly hopes so. And so does Eagle-Vail’s Mikeala Shiffrin, who would like to see Vonn keep Ilka Stuhec from narrowing the margin in the overall World Cup chase.

Shiffrin, a slalom and now giant slalom star, won’t be racing the speed events this weekend at Jeongseon, but she is there observing and hoping speed specialist Stuhec doesn’t earn the maximum 200 points by winning Saturday’s downhill and Sunday’s super-G.

Shiffrin leads the Slovenian Stuhec by 298 points in the overall chase (1,323 to 1,025) with just two regular-season World Cup stops left and then the World Cup Finals in Aspen later this month.

If Vonn takes the full 100 points and Stuhec gets 80 for second, which is what happened in training on Friday, then that’s 20 fewer points for Stuhec in the overall. Plus, and more importantly for Vonn, it would be one more step toward the all-time victory mark of 86 World Cup wins held by Swedish great Ingemar Stenmark.

And a clear sign that Vonn will be the favorite next year for her second Olympic downhill gold. No other American woman has ever claimed an Olympic downhill championship — a feat Vonn accomplished at the 2010 Vancouver Winter Olympics. She is clearly very comfortable on the 2018 Olympic course, where she also turned in the fastest time in Thursday’s training run.

“I really liked the course,” Vonn, an honorary ambassador for the Games, told the Associated Press. “It wasn’t perfect, but it’s a beautiful track. I think when the snow gets harder it will be pretty fast and extremely fun.”

Vonn missed Sochi in 2014 due to a knee injury suffered in a crash at the 2013 World Championships, and she suffered a season-ending knee injury in February of last year and a broken right arm in training at Copper Mountain in November that kept out until January.

At the 2006 Torino Winter Olympics in Italy, Vonn famously and gruesomely crashed during training, was airlifted to a hospital but recovered in time to finish in the top 10 in both speed events. Prior to her crash, she was a heavy favorite to medal at those Games.

“It’s been tough and stressful with the injuries,” Vonn told the AP. “It’s more difficult psychologically than physically. I have been working hard to get back to the Olympics for eight years.”

Here’s a press release from the U.S. Ski Team:

PYEONGCHANG, Korea (Mar. 3, 2017) – The women’s speed team will look to put a rough Audi FIS Ski World Cup weekend in Crans-Montana, Switzerland behind them as they take on the Olympic test event at the Jeongseon Alpine Centre this weekend with a downhill on Saturday and super G on Sunday. Meanwhile, the men head to Kranjska Gora, Slovenia for a tech series.

South Korea wouldn’t be the first place you’d expect for an Audi FIS Ski World Cup venue, but nestled into one of the most remote areas of South Korea in the Gariwang mountain surrounded by a 500-year-old sacred forest, the temps are cold and the snow surface is hard. That, combined with the handiwork of man, myth and legend – Wyoming’s cattle rancher-turned-snow-master Tom Johnston – provides for some sweet conditions.

Johnston, Chief of Race for the 2018 Winter Olympic Games, is the man behind the top-notch surface for the event, and earned the role after having crafted the surface at Beaver Creek, Colorado for the World Championships and as a mainstay for the annual World Cup stop. Add to that the 2002 Salt Lake City Games and 2014 Sochi Games, and you’ll quickly understand why the man is a legend…and why the Jeongseon surface is prepped to perfection.

The American Downhiller men had the first chance to check out the new track last year, and their first impressions were favorable across the board. It was certainly a successful weekend for Steven Nyman (Sundance, Utah), who grabbed third place in the first 2018 Olympic test event. There are some familiar faces from the American Downhiller crew in the mix this weekend, too, with Travis Ganong (Squaw Valley, CA) and Andrew Weibrecht (Lake Placid, NY) forerunning.

And, by the looks of it, the American women are liking the track just as much – if not more. Lindsey Vonn (Vail, CO) is the clear favorite after throwing down the fastest time in both training runs leading into the weekend. She bested the Slovenian speed powerhouse Ilka Stuhec and Italy’s feisty Sofia Goggia who went second and third both days, though disqualified for missing gates.

“The track is really has long, sweeping turns and good tactical sections, and it’s all about carrying your speed from top to bottom,” said Vonn after the second and final downhill training run. “When I first inspected yesterday, I knew I was going to like this track, and I think my training runs so far have been good, but not great. So, I’m surprised that I’m fast, but I think that just bodes well for the weekend and also for next year for the Olympics.”

The American women have also had the chance to do some cultural exploration off the hill, with a visit to the nearby Woljeongsa Temple, founded in 643 by the Silla monk Jajang. Laurenne Ross (Bend, OR) and her teammates are soaking it in and enjoying the exploration. “It’s a totally different culture and I’m enjoying every minute of it,” said Ross.

Over on the men’s side, keep an eye on Tommy Ford (Bend, OR) in giant slalom and David Chodounsky (Crested Butte, CO), as they lead a solid group of 11 men into a tech series including one giant slalom and one slalom. It is the last World Cup before Finals for the men, so they’ll be fighting to be in the top 25 in the world.

The test event will be live streamed on NBCsports.com/live with NBCSN carrying the women’s downhill and super G live on Friday and Saturday at 9 p.m. EST. The men’s tech series will air on Universal HD both days. Make sure to follow along on Instagram (@usskiteam) to catch all of the behind-the-scenes of the final test event before the Olympic Winter Games in 2018.

Road to Aspen
Mikaela Shiffrin (Eagle-Vail, CO), who will not compete this weekend as she has shifted her focus to the upcoming tech series at Squaw Valley, carries a 298-point lead over Stuhec into the weekend. There are presently four speed and four technical events remaining on the schedule. Shiffrin will seek to solidify her lead when the tour comes to Squaw Valley for a giant slalom and slalom. She holds a 145-point lead in slalom and could clinch that title in Squaw Valley. The Audi FIS Ski World Cup crystal globes will be awarded at the World Cup Finals in Aspen.

QUOTES
Lindsey Vonn
[On the course and conditions]
The track is really has long, sweeping turns and good tactical sections, and it’s all about carrying your speed from top to bottom. When I first inspected yesterday, I knew I was going to like this track, and I think my training runs so far have been good, but not great. So, I’m surprised that I’m fast, but I think that just bodes well for the weekend and also for next year for the Olympics.

[On the confidence that comes from skiing well on a track heading into a big event]
It’s kind of like Lake Louise. I get in the starting gate and I’m confident, I don’t even need to inspect the course. I know what I’m doing, and I know what it takes to win and I kind of already feel a similar sense of confidence on this track. I feel like I know exactly where to ski well and exactly what the key parts of the course are, and it’s not often that you feel that right away in the first and the second training run. I can’t tell you what’s going to happen next year, but so far, so good.

Laurenne Ross
[On the course and conditions]
It’s a lot of fun. Today was pretty awesome, the snow was nice and hard, it was icy, there’s a lot of good response whereas yesterday it was a bit soft. But, I think if the snow stays good, it’s going to be a great race. There are some really fun jumps and some nice turns, and all in all, the speeds are kind of high and it feels really fun.

[On the culture]
It’s a totally different culture and I’m enjoying every minute of it. This is definitely the most different culture I’ve been in, compared to most of the places we race in Europe, North America and even Russia. This is the most uncomfortable I’ve felt, and I like that. I really like immersing myself in something new and trying to learn things that I don’t really feel like I’m that familiar with. We went up to some temples the other day (Woljeongsa Temple) and explored a little bit. Trying to understand the language is really difficult, and even learning simple words is proving to be really tough, so it’s a challenge but I’m psyched.

Stacey Cook
[On the course and conditions]
We’ve had two, very different training runs, so we’re preparing for all conditions. Yesterday was really, kind of soft, spring-like and today was really nice, hard, compact, consistent conditions. I think we really liked what we had today. Yesterday was a lot like conditions in California, so I found that to be pretty fun, but the course runs really well with this harder, faster snow.

[On what it’s like to compete on the track before the Olympics]
We’ve heard that this climate is very cold, and that makes us hopeful to have consistent conditions throughout the whole Olympics. It’s good to just soak in every ounce of knowledge that we can about what may vary with the conditions and what this hill can offer.

[On what it’s like to ski on a new track]
Being an older racer on the World Cup circuit, we go back to the same hills year after year after year, and I’ve gotten unaccustomed to seeing things that are new. It’s really fun, it kind of makes me feel like a kid and makes me excited. That—along with the Olympic atmosphere—which is always so special, reminds you of your dreams and your goals you had as a kid and what’s inspired you all along.