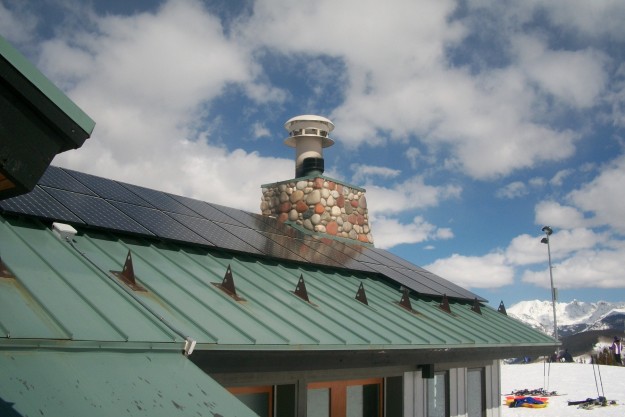 EDWARDS – The future of solar energy in Colorado and the United States is very bright, according to a panel of experts here Monday night, but it can go supernova-bright with a much more concerted push from local, state and federal government.

All four panelist the “Future of Solar Energy” forum hosted by the Vail Symposium at Colorado Mountain College talked about the inevitable transition away from fossil fuels – especially coal — as the primary means of generating electricity in the United States.

“We have a lot of old and not very clean coal plants that have been struggling with other forms of pollution and now carbon pollution is the latest thing,” said John Jimison, managing director of the Energy Future Coalition, a non-partisan public policy initiative of the United Nations Foundation.

“It is a sea change that is coming, and it’s being driven primarily by the economics as well as other side effects of coal mining, coal use and coal transportation that we can get past and we can get past with a much cleaner economy,” Jimison added.

While solar capacity in the United States has doubled and costs have dropped 80 percent since 2012, Jimison says solar energy still only accounts for 0.3 percent of the nation’s overall electrical generation. However, rapidly improving battery technology for storing solar power, the terrible condition of the nation’s coal-fired power plant fleet and public sentiment are conspiring to make coal-fired power generation increasingly obsolete.

“The coal industry was one of the major industries that gave us the industrial revolution and brought us to where we are, but it also, much without our knowledge, contributed a lot of the carbon dioxide that’s in the atmosphere and is going to be there for thousands of years after we’re all gone,” Jimison said, alluding to the key ingredient causing global climate change.

“Because it’s doing this, it’s not policy that’s driving coal out,” he added. “Yes, the Clean Power Plan makes it very difficult for states to maintain existing coal fleets, but many of the existing coal plants that we’re using are older than I am, and I’ll be 70 in January.”

The Clean Power Plan is the ambitious – some say draconian and heavy-handed – proposal by the United States Environmental Protection Agency (EPA) to dramatically cut carbon pollution from power plants – either through technology upgrades, efficiency improvements or by replacing coal with renewable energy or cleaner-burning natural gas.

Audience members after the panel discussion questioned the economic impact of the EPA’s plan, which the feds hope to put in place later this year and calls for reducing coal consumption 30 percent by 2030 – a $105 billion annual hit to industry revenues.

“It’s a concern, especially in Colorado,” said panelist Laura Farris, the climate change coordinator for the EPA Region 8 in Denver. “We have communities that are dependent on coal mines and coal-fired power plants, and we’re very sensitive to what’s going to happen in terms of transitioning.”

Facing legal challenges by the environmental group WildEarth Guardians, the Colowyo Mine in northwest Colorado is in danger of shutting down and eliminating 220 jobs in the Craig area.

In a separate and earlier interview with The Colorado Statesman, state Sen. Randy Baumgardner, a Republican whose district includes Craig, said the federal government and some state officials will stop at nothing to shut down coal mining and coal-fired power plants in Colorado.

“It’s an outright attack on coal,” Baumgardner said. “They’ve been trying to shut coal down. President Obama came out and talked about clean-coal technology, and the federal government and all these environmentalist groups have done nothing except try to shut coal down. That’s the bottom line.

“They think that renewable energy is the only way that this country is ever going to survive, and … we need all of it. We need renewables. But you know what? It’s not sustainable right now. We’ve got to have fossil fuels.”

At Monday’s solar symposium, Farris cited a Stanford University poll that found 74 percent of Americans believe that climate change is happening and that the federal government should be doing something about it.

“There is so much momentum that has built up around the Clean Power Plan,” Farris said. “It could be the biggest thing that the Environmental Protection Agency has ever done, and I think it really has the power to create this clean-energy future that we all deserve to have.”

Bailey also praised state legislation such as bills that established one of the nation’s most aggressive renewable energy standards – a standard that survived yet another legal challenge Monday — and said more is needed to change badly outdated utility business models that discourage efficiency and innovation.

“The things that we can all do, what’s truly going to change the model and the way things are done today is policy – legislation – and at the state level there’s a lot of resistance,” Bailey said. “Folks like us [need to go] to the state legislators and say, ‘Hey, we want to be able to take advantage of these technologies; we want some changes in the way things are done.’”

Panelist Mark Simmons, president of SolarMart in Denver, says it’s been tougher to make solar competitive in Colorado because the cost of electricity generation from other forms of energy is half of what it is on the East and West Coasts and a third of the cost of power in Hawaii. Still, he said solar is now very competitive in Colorado and would be even better positioned with less government intervention on at least one front – subsidies.

Simmons cited a recent International Monetary Fund report that found the United States subsidizes fossil fuels to the tune of $700 billion a year compared to $30 billion for renewable forms of energy such as wind, solar, bio and geothermal.

“When people tell me, ‘Oh, solar shouldn’t need a subsidy; it should stand on its own,’ I say, You’re right, just cut fossil fuels’ subsidy by half and eliminate ours.’ We’d win every time,” Simmons said. “That could be a real game-changer.”