Cultural exchange activities will headline sister cities programming this month when a delegation from Vail travels to San Miguel de Allende, Mexico, followed by a reciprocal visit that will feature well-known Mexican chefs and performers for the community’s enjoyment in Vail. 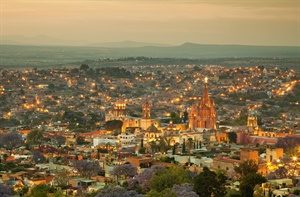 The activities are part of an official sisterhood agreement formed between the town and San Miguel de Allende last July. The partnership has included educational, environmental and cultural exchanges, as well as tourism and promotional opportunities.

The summer itinerary begins June 15 when a nine-member delegation from Vail will travel to San Miguel de Allende as guests of the city and tourism office. With representation from the culinary community, the arts and the town government, the Vail group will join counterparts in touring a variety of sights, including botanical gardens, an organic ranch, art galleries, a beer factory as well as culinary and live music experiences. A business meeting will also take place to exchange ideas and best practices focused on culture, music, art and tourism before the group departs on June 20.

The following week, representatives from San Miguel de Allende will travel to Vail to continue the cultural exchange with opportunities for community members and guests to enjoy the festivities. The 11-member Mexican delegation will be headed by Mayor Ricardo Villarreal Garcia. He’ll be joined by the city’s tourism officials, culinary representatives and musicians.

The weeklong series of events kicks off Tuesday, June 21 when Pilaseca, a San Miguel-based band performs at the free Hot Summer Nights Concert at the Gerald R. Ford Amphitheater. The band is well-known for its funk, rock, Latin and soul music and has performed at South by Southwest in Austin, Texas, as well as Vive Latino in Mexico. Doors open at 5:30 p.m. and the show starts at 6:30 p.m.

On Thursday, June 23, reservations are being taken for a special San Miguel dinner hosted by Sweet Basil from 6 to 10 p.m. featuring Chef Carlos Zamora Larios from Restaurant Moxi and Chef Donnie Masterson from The Restaurant. Chef Larios’ specialty is developing original interpretations of Mexican classics using an interesting mix of local flavors while Chef Masterson is known for bringing global comfort food to San Miguel. Reservations may be made by calling Sweet Basil at 970-476-0125.

Chef Larios and Chef Masterson will also present some of their favorite dishes during the first Farm-to-Table dinner of the summer from 5 to 8 p.m. on Friday, June 24 along Meadow Drive. For ticket information, call 970-476-0125.
In addition to the demonstrations and performances, the San Miguel delegation will be meeting with Vail officials on June 23 to discuss opportunities for future partnerships. The discussion will take place from 4 to 5 p.m. in the Vail Town Council Chambers and members of the community are invited to attend.

The 2016 summer cultural exchange activities build upon trips sponsored in 2015 by the two communities which resulted in the signing of a sisterhood partnership agreement.

Surrounded by mountains at an elevation of 7,000 feet, San Miguel is located about 170 miles northeast of Mexico City. Founded in 1541, San Miguel de Allende is best known for its art and cultural influences. Historic buildings feature Colonial and Spanish architecture that date from the 17th and 18th centuries. The city has since evolved from an agricultural center to an international tourism destination with a vibrant art scene, culinary offerings and cultural festivals.