Forecasters say Saturday is likely to be the best powder day, with 5 to 10 inches of new snow possible at Vail.

The high end of that forecast would put Vail at 334 inches for the season, which is just a little below the seasonal average of 350. The settled base as of Friday was 60 inches, or five feet. 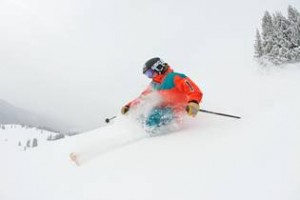 Closing weekend at Vail will likely look a lot like this (Vail Resorts photo).

Plentiful snow earlier in the season, primarily in December and January, contributed to a solid base that held up well through one of the driest Februaries on record. Then late March and early April saw a full-on return of winter, allowing Vail to extend its closing day from April 10 to April 17.

And April continues to produce snow showers in the high country, with a major winter storm heading in Friday through Sunday.

“From Friday midday through Friday night I expect that the snow will crank up for all mountains. It’s very likely that Saturday will be a powder day nearly everywhere in Colorado,” meteorologist Joel Gratz of Opensnow.com wrote Friday morning. “Most areas should see 4-8 or 5-10 inches by Saturday morning, and locations near and east of the divide should see over a foot.”

Back-to-back powder days at Vail should cap was has been an extraordinary season for Vail Resorts, according to the company’s latest earnings report. Here’s the press release:

BROOMFIELD, Colo., April 14, 2016 /PRNewswire/ — Vail Resorts, Inc. (NYSE: MTN) today reported certain ski season metrics for the comparative periods from the beginning of the ski season through April 10, 2016, and for the prior year period through April 12, 2015. The reported ski season metrics are for the Company’s U.S. mountain resorts, excluding results from Perisher and the urban ski areas of Afton Alps, Mt. Brighton and Wilmot Mountain. The data mentioned in this release is interim period data and is subject to fiscal quarter end review and adjustments.

Commenting on the ski season metrics, Rob Katz, Chief Executive Officer, said, “We are very pleased with our results as the 2015/2016 ski season comes to its conclusion. Our momentum throughout the year continued across each of our Western geographies with strong visitation from destination and local guests throughout the spring. The season’s results highlight the experience we provide guests at each of our resorts due to the engagement of our employees and the investments we have made at each of the mountains and the success of our more sophisticated marketing efforts to drive season pass sales and overall destination visitation.”

Regarding the outlook for fiscal 2016, Katz said, “The results from March 7, 2016 through April 10, 2016 were stronger than we expected driven in large part by favorability in the post-Easter time period with excellent conditions and robust spending across our resorts. As a result, we expect that our fiscal 2016 Resort Reported EBITDA will finish the year at or above the high end of our guidance range issued on March 10, 2016.”

Discussing spring season pass sales results, Katz continued, “Our attention is already turning to the 2016/2017 season with spring season pass sales underway. The breadth of our season pass collection, led by the Epic Pass and Epic Local Pass, remains the most compelling value for skiers and riders in the United States and from around the world. To date, we have seen very strong overall results with significant continued growth on top of the record results we saw last spring and good momentum across all of our critical geographies.”