Under the weather, Shiffrin still dominates in Slovenian giant slalom 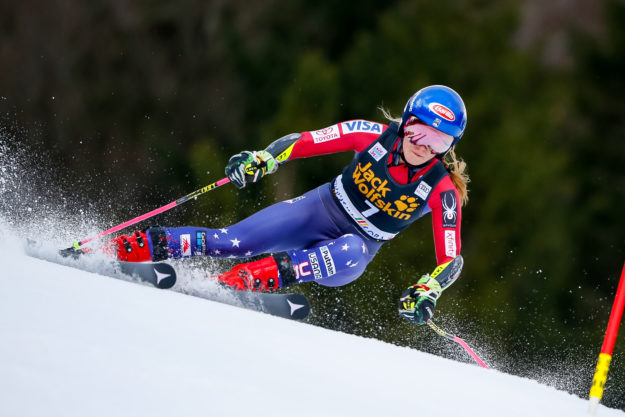 Even feeling under the weather and in warm and wet weather far from ideal for ski racing, EagleVail’s Mikaela Shiffrin is a powerhouse on skis.

The 22 year old won the sixth giant slalom race and 39th World Cup race of her stellar career on Saturday in Kranjska Gora, Slovenia, battling a cold and iffy course conditions. The races were moved from Maribor, Croatia, due to a lack of snow and warm weather.

“I’ve been a little bit sick the past couple days,” Shiffrin said. “A lot of the girls have been sick, so I didn’t feel like it was an excuse for today, and I wanted to come out and charge.”

The win was the eighth so far this season for Shiffrin, the defending overall champion who now leads that chase by more than 600 points this season. It was also her third in a row and sixth win in the last seven races. Here’s the press release from the U.S. Ski and Snowboard team:

Feeling a bit under the weather and racing through light rain on a rough, straight-set course, Shiffrin (Eagle-Vail, Colo.) took the first run lead and held on to win her eighth FIS Ski World Cup race this season.  Tessa Worley of France was second, and Sofia Goggia of Italy picked up her fourth World Cup podium of the season in third.

“I’ve been a little bit sick the past couple days,” Shiffrin said following her victory. “A lot of the girls have been sick, so I didn’t feel like it was an excuse for today, and I wanted to come out and charge. Luckily it wasn’t a very long GS today, so I just felt like ‘OK, I just need two minutes of energy, and if I can do that, I’ll be fine.’”

Saturday’s race was scheduled for Maribor, Slovenia, but was moved to Kranjska Gora due to snow conditions. It was the first time the women have raced in Kranjska Gora since 2012.

Up next, the women race slalom Sunday in Kranjska Gora.

HOW TO WATCH
All times EST
*schedules subject to change