With two nearly perfect runs, Eagle-Vail’s Mikaela Shiffrin claimed her first World Cup slalom win of the season against a stacked field in Kuehtai in Tirol, Austria, on Monday.

Sarka Strachova of the Czech Republic was second and Wendy Holdener of Switzerland was third. Resi Stiegler, of Jackson Hole, Wyo., finished in the points in 23rd. 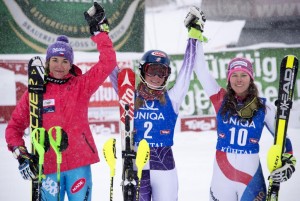 It was a small tech team competing at Kuehtai in Tirol, with only Shiffrin and Stiegler making the flip. Unlike the previous day’s giant slalom, the course was in great condition with a simple set so the women could let their skis run.

Even though Shiffrin faced stiff competition, she skied confidently and built her lead throughout the second run, winning by .80 of a second.

In Sunday’s giant slalom, Shiffrin climbed on her first podium since finishing tied for first in the opening GS of the season in Soelden, Austria, in October.

Shiffrin is the first to acknowledge that she’s been suffering from nerves and gear issues throughout the past few months.

“It was the first time on the second run that I felt like I was smooth and attacking,” Shiffrin said after her victory. “I finally trusted my skis, not just my ability.”

Monday’s win was the 11th career victory for Shiffrin, 19, who now stands third in the overall hunt behind Tina Maze (sixth Monday) and Anna Fenninger.

Stiegler, recovering from being sick, was stoked to make the second run. “I knew I was fast,” she said after her first run, when she finished 13th. “I just want push the envelope.”

But her aggression got the best of her, and her skis threw her into the backseat right before the finish. The mistake cost her time and she finished 23rd overall.

After the New Year, both men’s and women’s tech teams head to Zagreb-Sljeme, Croatia for a slalom.