No, I’m not synthetically stoned: Why I want the New England Patriots to come back to Denver

And why the Brady-Belichick-Trump troika creeps me out 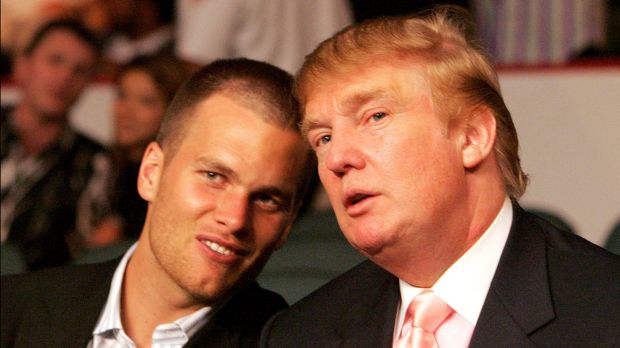 Someone the other day ran a nickname for Donald Trump past me that I initially kind of liked: “The Orange Pony.”

It describes his weird hair color and at the same time is suitably derogatory for a guy who’s just trying to hate his way to the White House, or at least the GOP nod, at which point all sorts of hijinks will ensue.

If you’re a Trump fan and your face is now flipping through 50 shades of orange as you ready some sort of anti-immigrant, anti-Islam, anti-woman rant for the comments section, don’t stop reading now, because you’re probably also a New England Patriots fan, and I’m about to really tear into their underinflated asses.

But first, here’s what I now don’t like about Trump’s “Orange Pony” moniker: It’s too reminiscent of the Denver Broncos Pony Express cheerleading squad, which predominantly wears orange. And I don’t want Trump associated with anything in our great state, especially our beloved Broncos. 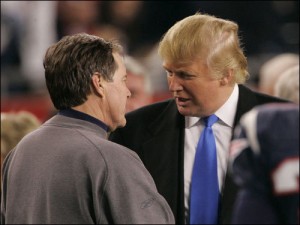 Now, back to the Deflatriots and their evil duo of Tom Shady and Bill Belicheat. I despise the Patriots so much as a sports fan – mostly for their ceaseless stretching of the rules but also out of jealously because of all their Lombardi trophies – that in my mind’s eye I can easily conjure up an image of Brady, Trump and Belichick in a dark room wearing hoodies and gloating over their evil plans for world conquest.

I want Trump and the Patriots to simultaneously go down in flames so fast and so hard that I’ll gleefully celebrate a win Saturday by the Broncos’ divisional archrival the Kansas City Chiefs in Foxboro. But what I really want to see is the Chefs absolutely pummel the Patsies brutally but still lose, so that New England – after a Denver win over Pittsburgh on Sunday – has to come back to Mile High this season – a place where they almost never win.

Boston-area fans are even more annoying than Cubs fans because their teams actually win, and they think the world is out to get them, so they loudly cry every time another scandal breaks, whether it’s Spy-gate, Deflate-gate, Aaron Hernandez murdering people or the latest, Chandler Jones freaking out on synthetic pot. Time for the dynasty to go up in smoke.

As for Trump, I keep hoping he’ll say something so hatefully outrageous that even the Bundy militia family from Nevada (and currently on a camping trip in Oregon) just says, “Whoa, Donald, you just took it a little too far.” So far there have already been several comments (menstruating Megyn Kelly, anyone?) I thought would have derailed him, but clearly I’m underestimating the pure, unbridled evil in the hearts of Trump-backers.

But back to football. That same evil lurks in the hearts of most if not all Patriots fans, and I say that simply because I’m a long-suffering (except for two blissful years in the late 90s) Broncos fan – not because I actually believe everyone who roots for the Patriots and the Roid Sox (never getting over the 07 Series) is actually evil. However, some of you truly are.

So a bruised and battered Patriots team having to limp back into Denver for the AFC Championship Game is really my best-case scenario. Our defense, already really good when the Pats lost in Denver in November, is now even better because guys are rested and we have several injured players back.

Our offense, good enough with backup Brock Osweiler to beat the Patriots a month and a half ago, may be better now with Peyton Manning back at the wheel … or it may be worse. But the good thing is Denver coach Gary Kubiak has seen the light, knows he can win with Brock, and won’t hesitate to switch them in and out to keep the Pats off-balance, or at least pull Peyton if he starts tossing it to the other team.

Hard to believe in October that I actually asked the question, “Should the Broncos seriously consider benching Peyton Manning?” They were forced to when Kansas City came to town and revealed the extent of Manning’s now supposedly totally healed case of plantar fasciitis.

Brock wound up going 5-2 and beating New England and Cincinnati – key wins that locked up the No. 1 seed and home-field advantage throughout the playoffs. I’m not going to totally blame Osweiler for his two losses either, both of which can be chalked up in equal parts to dropped balls by receivers, terrible offensive line play, bad coaching and a defensive collapse in the second half against Pittsburgh a few weeks ago.

Now I know, the Broncos can’t look past a seriously banged-up Pittsburgh squad and start salivating for a banged-up and apparently synthetically stoned New England team. The Doncs reportedly looked past the Colts to the Pats last season and wound up getting worked.

But come on, how big a favor did the Bengals do the Broncos last Sunday when they went totally WWF and started pile-driving guys and viciously headhunting with the game all-but won? And how big of a favor did Steelers coach and former CSU Ram Joey Porter do his hometown Broncos when he went out on the field and goaded Pacman Jones into totally losing his mind.

Great, great stuff. That sent the far hotter team (the Chefs) to New England and left the Steelers victorious but barely standing. That’s the way I want to see the Pats after Saturday’s game, and then I can really dial up the vitriol when the Broncos take care of business at home on Sunday.

As for “The Orange Pony,” please ride off into the sunset soon, or at least come to Colorado and let Thunder curb-stomp you along with your axis of evil buddies Shady and Belicheat.