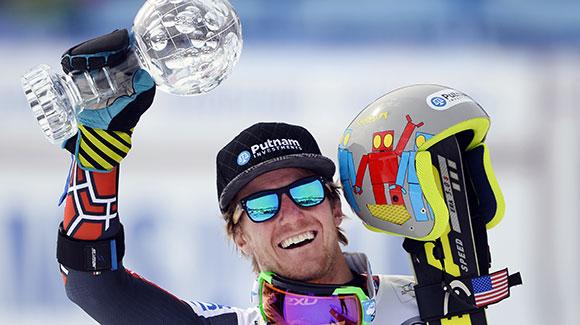 Ted Ligety beams as he hoists a hard fought crystal globe after a GS win in the season finale of the Audi FIS Alpine World Cup in Lenzerheide. (Getty Images/AFP-Fabrice Coffrini)

Hirscher lost his hold on the globe when he finished the race fourth by a mere hundredth of a second. Ligety last month became the first American man with two Olympic gold medals, claiming the GS at the 2014 Sochi Winter Olympics.

“I definitely knew at the start of the day that I had a chance, but you know it’s not a good chance when it comes to Marcel,” Ligety said. “The only way you can win is by winning. I knew it was going to be a major uphill battle for sure. I’m super thrilled. This is a goal every year to win the giant slalom globe but it was by the skin of my teeth today.”

Ligety’s 23rd career win pushed him one ahead of Hirscher and into a tie for 15th on the all-time list. He’s also just four wins from tying Phil Mahre for second most wins by an American man (27).

“It was a tough race this year. I was able to win quite a bit but it’s a testament to the fortitude of Marcel to get on the podium in every race, so I’m happy to walk away with [the GS globe],” Ligety said. “You don’t worry about the math when you’re skiing.”

It was her fifth slalom win this season and the ninth of her short career, tying her for third on the all-time American women’s win list with Picabo Street. It’s also Shiffrin’s second straight slalom globe for winning the season discipline title.

Shiffrin, who turned 19 Thursday, tied the U.S. record for career slalom wins set by both Tamara McKinney and Phil Mahre in the 1980s. They were both 24 when they reached nine slalom wins.

Shiffrin said the the very tricky Lenzerheide course was a welcome challenge.

“It was a very difficult course set, and we don’t see that very much on the women’s side,” she said. “I was actually excited about it because it was a little bit of a change. I just wanted to attack as well as I could. I was lucky to get bib one today because the snow got worse as the day went on. So we took advantage of that and in the second run I was just trying to ski as free as I could for the conditions.”

Shiffrin wound up winning by 1.44 seconds over Sweden’s Frida Handsotter.

“I guess my secret is not letting people tell me I can’t do it,” Shiffrin said. “Everybody thinks that this is impossible; you can’t win a race by 1.4 anymore. You can’t win the Olympics at 18. People say you can’t a lot and I never listen to them.”