Ted Ligety skied into some very elite company Sunday in the World Cup opener at Soelden, Austria. The Park City racer became the first man to win three straight giant slalom races at Soelden (tying Hermann Maier for the most wins there), and he joined the likes of Jean-Claude Killy and Lasse Kjus on the all-time wins list with 18.

“It feels good,” Ligety said after beating out Frenchman Alexis Pinturault by .79 seconds. “I was definitely a little anxious coming into this race just because you never really know how you stand. 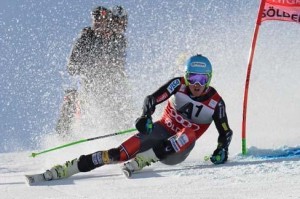 “In training last year I was winning by a second and a half versus everybody, and this time I was getting beat in training sometimes, so it’s good to know that you’re actually still fast. And we have a lot of guys that are skiing fast so it’s nice to get some confirmation.”

On a soft, wind-swept course, Ligety displayed the form that vaulted him to a fourth overall GS title and three world championships last season. While he couldn’t duplicate his dominance of more than two seconds at Soelden last season, he still won by plenty, gapping his chief rival, Marcel Hirscher of Austria, by 1.02 seconds.

Ligety, 29, tied Hirscher, who finished third Sunday, on the all-time wins list. Ligety and the 24-year-old Austrian are now in a log jam at 19th all-time with the legendary Killy and Kjus, and Ligety is third all-time in wins by American man behind Phil Mahre (9th with 27 wins) and Bode Miller (7th with a U.S. record 33 career World Cup victories).

Miller returned to racing Sunday after taking all of last season off to recover from a knee injury. The 36-year-old Miller, likely skiing his last season as he looks to add to his five career Olympic medals at the 2014 Games in Sochi, Russia, in February, said he wasn’t that happy with his performance Sunday.

“It was disappointing skiing today,” Miller said after finishing 19th in his first race since February of 2012. “It’s not where I’ve been skiing the last weeks and obviously not where I want to start out.

“I’m skiing a lot faster than that in training but that’s the difference in races. You have to get a good start position first. But I gained some points, so that’s good. In training I know where I’m at, so I’m not really worried about too much. It just would have been nice to ski better.”

Miller has won twice at Soelden, but not since 2004. Tim Jitloff, of Reno, Nev., was right behind Miller in 20th.

Ligety, who won a gold medal in the combined event at the 2006 Olympics in Torino, Italy, when he was just 21, said winning on the World Cup tour will get him in the right place mentally for the Sochi Games.

“I think the best preparation for the Olympics is the World Cup season, because that gives you the confidence,” Ligety said. “It keeps you sharp and just that whole competitive atmosphere keeps you going and gives you the ability to bring your best skiing to the Olympics.”

Ligety was shut out of the record American medal haul during the 2010 Winter Olympics in Vancouver, but he towered above the competition at the World Championships in Schladming, Austria, last February, winning gold in combined, super-G and GS.

If he can start winning in other disciplines this season, he might be able to break Hirscher’s run of two straight overall titles. While Hirscher has the same number of career wins as Ligety, seven have come in GS and 10 in slalom. All of Ligety’s wins are in GS.

On the women’s side, Eagle-Vail’s Mikaela Shiffrin was the top American in Saturday’s GS at Soelden, finishing a very respectable sixth. That’s the best GS result ever for the 18-year-old who’s already won four World Cup slalom races and a slalom world championship last season.

“Of course I’m hungry for more,” Shiffrin said after Saturday’s race. “But those girls skied really well out there today, so I enjoyed watching some good skiing and I felt like I skied well myself. I just feel like the sky is the limit and my GS is a lot better than last year.

“It’s tough when you’re only good in one event and you’re skiing two. You just want to improve in both. My biggest goal this year is to keep my slalom but improve my GS so that it can hopefully match my slalom. So we’ll see how it goes.”

Next up on the men and women’s circuit are slalom races Saturday (women) and Sunday (men) Nov. 16-17 in Levi, Finland. Shiffrin was third in Levi last season and went on to four victories to claim the season slalom title.

Shiffrin, barely old enough to vote, is already eighth on the career victory list among American women. Her next win will tie her with U.S. standouts Christin Cooper and Kiki Cutter.