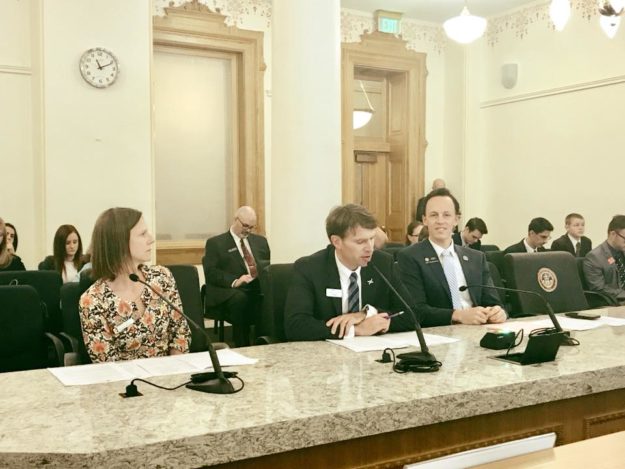 Eagle Democratic Rep. Dylan Roberts saw two of his bills aimed at lowering runaway Western Slope health-insurance rates pass out of the state House on Wednesday, with both measures now headed to Senate committees for debate.

The two bills he sponsored — one a study bill directing the state to find solutions and the other a direct financial assistance measure — are aimed at easing the health-insurance burden on all rural Coloradans impacted by skyrocketing rates.

While both bills passed with overwhelming Democratic support in the Dem-controlled House, they both face a tougher path to approval in the GOP-controlled Senate.

Roberts’ study bill, HB 1384, is aimed at increasing competition in underserved areas like Eagle County, where there are only two health-insurance plans offered on the state exchange for people who don’t get insurance through their employers.

“It is a study bill, however, I don’t think we’ve ever had a study like this that’s specifically tailored to the problem that a lot of Eagle County and Western Slope residents face, which is the lack of competition in the insurance market,” Roberts told Real Vail.

“The goal is to figure out how to actually leverage state infrastructure into another health insurance plan that can be offered alongside the one or two providers that there are in a lot of counties on the state exchange.”

For more on how HB 1384 would do that, see the story after the press release below.  HB 1205, a direct financial assistance bill for people making too much to qualify for federal healthcare subsidies but not enough to afford current health-insurance rates, lacks the bipartisan support of HB 1384.

HB 1205 is a bill run unsuccessfully last session by Roberts’ predecessor, Diane Mitsch Bush, and is sponsored by Vail Democratic Sen. Kerry Donovan in the Senate, but it’s been sent to a Senate kill committee in State, Veterans and Military Affairs.

HB18-1205 is Rep. Roberts’ bill to reduce the disparity in health care costs between rural Coloradans and those on the Front Range. Rural Coloradans pay significantly higher health insurance premiums and the burden is heaviest on rural Coloradans whose incomes fall between 400 percent and 500 percent of the Federal Poverty Level, who earn too much to qualify for federal stipends and too little to afford their premiums.

“Simply because of the zip code they live in, too many Coloradans on the Western Slope and Eastern Plains face significantly higher health insurance premiums than Coloradans in the more urban parts of the state,” Rep. Roberts said. “That means that families are having to choose between child care, mortgage or rent payments, and health insurance every month. That is not fair and this bill provides some much-needed equity.”

The bill would provide temporary financial assistance to individuals and their families between 400 percent and 500 percent of federal poverty level who spend more than 20 percent of their household income on health insurance premiums and live in one of 48 counties in the western half, southern tier or eastern third of the state.

Eligibility would be limited to those who do not qualify for any other health insurance including VA, Medicaid, Medicare or group policies. Assistance would only go toward purchase of the lowest-price “bronze” plan on the state healthcare exchange.

Also passing the House today was HB18-1384, sponsored by Reps. Roberts and Marc Catlin, R-Montrose. It requires the state Department of Health Care Policy and Financing and the Division of Insurance to devise three different health insurance plan options using the state’s existing health care infrastructure, including an option to allow Coloradans to purchase a plan through Medicaid.

Coloradans across the state, and especially in rural Colorado, are facing rate increases on the individual health insurance market that can run upwards of 30 percent. And less than 50 percent of Coloradans have access to insurance through their employer, highlighting the importance of finding ways to make individual plans more affordable and accessible.

“Competition in our health insurance market is sorely needed,” Rep. Roberts said. “This bill will give the legislature the information it needs to figure out how to bring about that competition. The best way to do that may be a program like a Medicaid buy-in or maybe it is a regionally based co-op. This study will allow us to make well-informed and strategic decisions to address this urgent problem. I am pleased with the bipartisan support.”

Here’s the story on HB 1384 that ran in the Vail Daily on Monday:

It’s an issue that’s been studied to death, but the problem seems very clear: health insurance premiums on the individual marketplace on Colorado’s Western Slope are insanely high and part of a trifecta of economic forces crippling small businesses and entrepreneurs.

Coupled with the high cost of living and tight housing market, health insurance rates for everyone who doesn’t get their insurance through their employers – more than 50 percent of people statewide – are prohibitively high.

“What people are coming to realize on both sides of the aisle down here [at the State Legislature] is that this health insurance cost is never going to go away, so it’s about time we start looking at the fundamental problems and not be so partisan about it,” said Democrat Dylan Roberts, who represents Eagle and Routt counties.

Roberts is a prime House sponsor of a bipartisan bill – along with Rep. Marc Catlin, R-Montrose – of HB 1384, which passed out of the House Health, Insurance & Environment Committee by an 8-5 vote on Tuesday. It should get a hearing in front of the House Appropriations Committee early next week, and then Roberts hopes to see a full House vote in the near future.

On the Senate side, the bill is sponsored by Kerry Donovan, D-Vail, and Don Coram, R-Montrose.

There are currently 14 counties in Colorado, including Roberts’ original home of Routt County (he now lives in Eagle), that have just one health insurance company available on Connect for Health Colorado – the state’s individual-market health-insurance exchange. Eagle County has two companies available on the state exchange – Anthem and Kaiser.

If it passes both the House and Senate and is signed into law by Gov. John Hickenlooper, HB 1384 directs both the state Department of Health Care Policy and Financing and the Division of Insurance to come up with three different health-insurance plans using the state’s existing health care infrastructure in an effort to create more competition in those underserved counties.

The three plans need to be submitted to the legislature by February of next year, which would give lawmakers the rest of the next legislative session (ending in May of 2019) to pick a plan and run a bill that would then finally begin lowering rates by generating more competition.

One of the plans the bill requires a proposal for is an option to allow Coloradans to purchase a health-insurance plan through the state’s Medicaid department. It’s hoped a so-called “public option” in Colorado would create competition and drive down rates for private plans.

Right now in Eagle County, insurance brokers say a family of five pays about $2,800 a month for an Anthem plan or $2,000 a month for a Kaiser plan on the individual market – much less if they can keep their income below certain levels and qualify for Advanced Premium Tax Credits under the Affordable Care Act. But those income levels are very low for a pricy place like Vail.

“Congress could help stabilize these insurance costs, but that’s unlikely to happen anytime soon,” Roberts said. “Many middle-class families must choose between paying for health insurance and paying for housing, child care or college tuition. This bill will set forth detailed options for how we can bring badly needed competition to the market.”

The second plan his bill requires the two state departments to study is a public-private partnership plan modeled after the federal Children’s Health Insurance Program, or CHIP.

And the third option the bill studies is what Roberts dubs a regional or community-based coop plan that would allow small companies to band together to negotiate a group plan with a private insurance company. Sponsored by a chamber or business association, the group would then have the increased buying power of a much larger company like Vail Resorts.

“This model works in other places like Wyoming and Missouri and we’re trying to see if we can duplicate it in Colorado,” said Chris Romer of the Vail Valley Partnership. “But there are a lot more rules in Colorado that make it harder, and at the federal level they’re trying to make it easier and we as a state are pushing back on it. That doesn’t make a lot of sense.”

Romer said he’s talked to Colorado’s Interim Insurance Commissioner Michael Conway, who last month wrote a letter to the U.S. Department of Labor opposing rule changes that would make “multiple-employer welfare groups” easier to set up. Conway’s concern is the plans would allow for coverage exemptions that pull healthy people out of other plans.

Romer said all possible solutions need to be explored aggressively to bring down health insurance costs on the Western Slope.

“In an environment with an already high cost of living and with employee retention challenges increasingly reliant on entrepreneurs, healthcare and housing are two issues that are the straws that break the camel’s back in terms of being able to truly grow and scale an entrepreneurial business here,” Romer said. “We have some of the best care in the world; we just don’t have access to it.”

Roberts said the $360,000 price tag for the bill is what generated the five no votes in committee, but that’s the cost of the two state departments hiring accountants and the economists to do the actuarial analysis of the three plans. And he points out the current budget has the money to come up with a legislative solution for one of the Western Slope’s most intractable problems.