Former Vail mayor and current Vail Town Council member Ludwig Kurz recently was awarded the Austrian Decoration of Merit in Gold for his “outstanding efforts and achievements with regard to the close friendship and partnership” between Beaver Creek and Lech-Zürs in Austria.

The sister resort relationship was first forged 12 years ago when a group of Vail and Beaver Creek officials visited the Austrian resort towns of Lech and Zürs on a side trip while attending the World Alpine Ski Championships at nearby St. Anton. 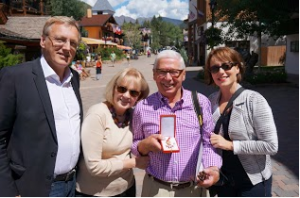 Kurz organized the trip to show the American contingent two of the most high-end Austrian ski towns. Although he’s called the Vail Valley home since 1966, Kurz is originally from Salzburg, Austria. That side trip in 2001 led to a sister-resort relationship that includes student, ski instructor, musician and chef exchanges, cultural trips back and forth for end-of-the-season parties and Oktoberfest celebrations and residents traveling back and forth for skiing, cycling and hiking.

“It’s a real live exchange that is very, very positive not only from the point of being on paper but real people exchanging places, exchanging ideas, learning from each other and growing as we do it,” Kurz said.

Kurz adds that only in America can someone from another country rise to such high political office and serve his or her adopted community. “The fact that I was mayor here, the fact that I was on the town council for many years — that wouldn’t happen in Austria,” Kurz said.

Here’s the full text of a notice posted Aug. 14 on the Facebook page of the Austrian Consulate General in Los Angeles:

“Ludwig Kurz receives the Austrian Decoration of Merit in Gold for his outstanding efforts and achievements with regard to the close friendship and partnership between Beaver Creek (Colorado) and Lech Zuers am Arlberg (Austria):

“As the director of Community Relations for the Beaver Creek Ski Resort, Ludwig Kurz initiated the Sister Resort relationship between Beaver Creek and Lech Zuers am Arlberg. Every winter season, ski groups from Lech Zuers visit Beaver Creek, frequently during the Alpine Ski World Cup Races in Beaver Creek, and groups from Beaver Creek visit Lech Zuers during “Der Weisse Ring” ski race. Every year, the “Trachtenkapelle Lech” provides musical entertainment at Beaver Creek’s Oktoberfest, while the “Tony Gulizia Jazz Trio” from Beaver Creek performs in Lech during the April Sister Resort party. Organized by the Beaver Creek hiking center, a group of dedicated mountain hikers visit Lech Zuers every September. Every two years, the two resorts exchange groups of about 12 students. For two weeks, the teenagers live with local families, participate in cultural and outdoor activities and work on their language skills. The program also includes the culinary arts with exchanges of chefs and other hospitality professionals. Both resorts highly cherish their close partnership and the many beautiful personal friendships between Beaver Creek and Lech Zuers am Arlberg. Congratulations!”

Five days of skiing at each of the five ski areas of the Arlberg region – Lech, Zürs, St. Anton, St. Christoph and Stuben – were added to the Vail Resorts’ Epic Pass in May.