EagleVail’s Mikaela Shiffrin, one of the greatest World Cup and Olympic ski racers of all time, is speaking out about her anxiety issues during Mental Health Awareness Month, participaing in the #MyYoungerSelf campaign from The Child Mind Institute.

The campaign, aimed at ending “the stigma attached to mental health and learning disorders,” will share celebritiy stories on its site each day as they speak to their younger selves via homemade messages recorded on smartphones. Today’s video features two-time gold medalist Shiffrin discussing her struggles with anxiety. 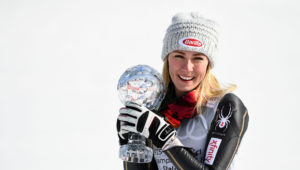 “You’re shy, and its OK. You can be shy, and you can love being with your best friend and your family. Or you can love being by yourself, that’s fine. At some point I think it will be important that you challenge yourself a little bit, and you try to get it out there a little bit. You just start to crack open the shell just a little bit. As you challenge yourself you’ll get more comfortable, and as you get more comfortable you’ll be able to take bigger steps to challenge yourself. That transition to becoming maybe a little bit more social will be natural. But just to know that, it’s okay to be shy. You don’t have to be the loudest voice in the room. You don’t have to be the one who tells all the funniest jokes. You can just be there and appreciate being there, and that’s just fine. As you grow, you’ll start to feel more comfortable being a part of a conversation, not just watching, and that’s gonna be a really fun process to go through, because it’s been an amazing process for me to go through.”

Here’s the full press release on the #MyYoungerSelf campaign from The Child Mind Institute:

(New York, N.Y. – May 1, 2018) — The Child Mind Institute today launched the second year of its impactful #MyYoungerSelf social media campaign, bringing together more than three dozen actors, Olympians, authors, comedians, advocates and other influencers to share personal videos with the advice they would give their younger selves about growing up with a mental health or learning disorder.  The goal of the #MyYoungerSelf campaign is to eliminate stigma by showing children and adolescents who struggle that there is a bright future ahead if they open up and ask for help.

Each day in May, which is National Mental Health Awareness Month, the Child Mind Institute will reveal a homemade video and childhood photo featuring a celebrity or mental health advocate, including Lindsey Stirling, Ginger Zee, Charles Schwab, Jessica McCabe, Tim Howard and Adam Grabowski on the Child Mind Institute’s social media channels and web site childmind.org. The public is encouraged to get involved by sharing and liking these videos on social media and uploading their own videos with hopeful messages to their younger selves.

“There is no part of you that you should be ashamed of. You are exactly who you’re supposed to be. And the only person qualified to even be you…is you.” – Sarah Silverman, Depression

“If I could say one thing to my younger self it would be, have fun with it. You know you’re not stupid. So don’t ever believe for a second that you are.” – James Van Der Beek, Dyslexia

“In school, I felt like a loser every day, but you know what feeling like a loser did for me? I have great empathy. I can never look down at anyone who’s struggling with anything, and that’s given me great leadership and that’s helped to make me rich.” – Barbara Corcoran, Dyslexia

“You learn the tools to deal with it, whether it’s breathing or learning or some kind of meditation, which I find helpful, or just learning what the root of it might be, just having some control over it and knowing that is really a completely normal thing.” – Mark Ronson, Panic Disorder

Of the 74.5 million children in the United States, an estimated 17.1 million have or once had a mental health disorder — more than the number of children with cancer, diabetes and AIDS combined. In spite of the magnitude of the problem, lack of awareness and entrenched stigma keep the majority of these young people from getting help. Children and adolescents struggling with these disorders are at risk for academic failure, substance abuse, and a clash with the juvenile justice system — all of which come at tremendous cost to them, their families and communities.

“By sharing their own personal stories for the second annual #MyYoungerSelf campaign, these actors, athletes, authors and influencers are helping to eradicate the stigma that keeps the 1 in 5 young people who struggle with a mental health or learning disorder from getting help and reaching their potential,” said Dr. Harold S. Koplewicz, Founding President of the Child Mind Institute. “We all know and love these children—if it’s not your son or daughter, it’s a niece or a nephew, or your child’s best friend at school. #MyYoungerSelf represents our society, whether you’re famous or not, coming together to get these kids the help they need.”