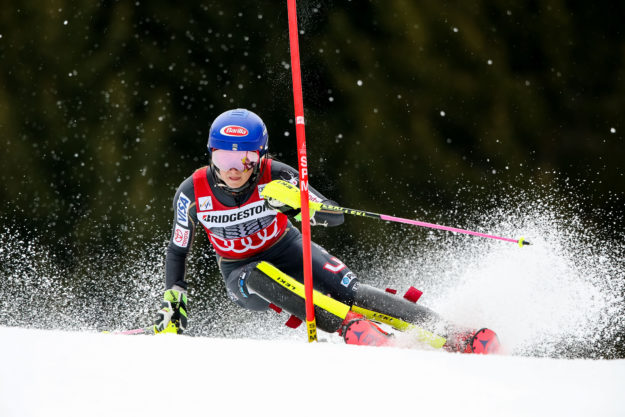 At just 22, Shiffrin is quickly etching her name into the record books. After becoming just the fourth American to win multiple overall titles with a third-place giant slalom finish on Friday, Shiffrin now stands all alone in second with the most women’s technical event (GS, slalom) wins at 37.

Her 11th win of the season ties her mark from last year and is the third most ever on the women’s circuit behind Vail’s Lindsey Vonn, who won 12 races during the 2011-12 season and retired great Vreni Schneider of Switzerland who won a record 14 races during the 1988-89 season.

Shiffrin can at least tie Vonn’s American season-victoy mark during next week’s World Cup Finals at Are, Sweden, where she can also take sole possession of fifth on the women’s win list.

Vonn, 33, will also be racing in Are for the first time since winning downhill bronze at the 2018 Pyeongchang Winter Olympics, where Shiffrin won gold and silver in GS and combined, respectively.

Vonn, who did not compete in the Ofterschwang tech events, is trying to pad her overall women’s record of 81 career World Cup wins as she’s chases the all-time mark of 86 held by Sweden’s Ingemar Stenmark.

For Shiffrin, Saturday’s slalom title is her fifth in six years — an unmatched run of dominance that includes a gold medal in the event at the 2014 Sochi Winter Olympics.

“I was happy yesterday but I was still thinking how I could prepare best for the race today and what I needed to do to come out and be motivated and ski really fast again,” Shiffrin said Saturday, according to the Associated Press.

“It’s a big challenge to do that at the end of the season but Wendy really wants to win, Frida is coming off her gold medal in slalom in South Korea, so everybody has her own motivation,” Shiffrin said.

Wendy Holdener of Switzerland finished second on Saturday, just .09 seconds back, and Frida Hansdotter of Sweden — who topped Shiffrin for a surprise gold in slalom at Pyeongchang — wound up third.

Shiffrin, who turns 23 on Tuesday, set the mark for the most World Cup wins by a 22-year-old, and she says she’s not done pushing hard this season.

“It’s still my goal to finish the season as strong as I can,” Shiffrin said, adding she would “try to have some fire” in Are.

Here’s the U.S. Ski and Snowboard Team release on Shiffrin’s victory on Saturday:

“It was a really good fight,” said Shiffrin, who celebrates her 23rd birthday March 13. “For Wendy, I knew she had a really good run because I could hear the announcers from the top, but I thought ‘not today Wendy!’”

“It was an incredible, incredible weekend for sure,” said Shiffrin, who now heads to the World Cup Finals in Are, Sweden next week. “My biggest challenge this year has not been the Olympics, or the (World Cup) overall or any of that, but getting motivated for these last races.

“I’m in a constant chase of skiing my best and skiing free,” she added. “Hopefully, I’m not going to be feeling a lot of nerves (in Are) because there is not a lot of risk. But still every time I get in the start gate I want to perform at my highest level, and that’s the biggest goal there.”

Up next, the women race downhill at the World Cup Finals in Are March 14, followed by super-G March 15; team event March 16; slalom March 17 and giant slalom March 18.